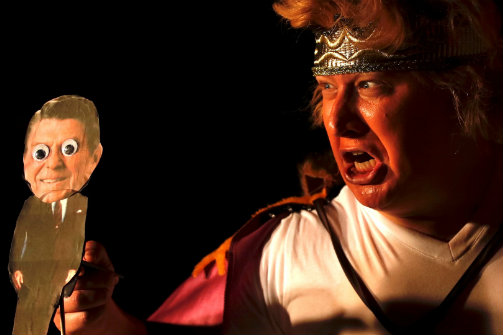 BOTTOM LINE: Impressionist David Carl, who had great success playing Gary Busey as Hamlet, is back, this time channeling America’s Narcissist-In-Chief in a biting political satire.

If you weren’t lucky enough to catch David Carl in his truly brilliant Gary Busey's One Man Hamlet, you missed an enormously entertaining performance. But luckily, you now have the chance to see him inhabiting an arguably even more insane actor—"Carl David," whose career and fortunes impersonating The Big Cheeto have taken off in tandem with the President’s ascendancy.

Carl David, clad in a stained white t-shirt and shorts, wakes up in an empty, unfamiliar room when suddenly a voice is piped in. It’s POTUS (recorded by David Carl), who has kidnapped the actor and brought him to an unknown location to be interrogated about the production of King Lear he has been doing as The Donald. In this future America that (at least right now) is more than a few clicks to the right of reality, the First Amendment is long gone, and artistic endeavors can get you executed without the right to trial.

The character of Lear, a shallow, megalomaniac king who craved power and demanded loyalty, is clearly a spot-on choice. Naturally the builder of walls has strong opinions about Carl’s Shakespearean pick: “I know that play. It’s so boring.” They engage in a debate over the merits of King Lear. Carl tells him it’s an exciting play about a father who disowns his son and in which almost everyone dies, getting 45 in his sweet spot when Carl tells him it’s a show about truth. The President’s response: “No one tells the truth more than me.” Under the threat of imminent death for treason (there are drones available to dispatch him), Carl agrees to perform his show for his unseen audience. There is also a live feed of Lear that people can watch and “like.” If the Prez is pleased, he will live, but otherwise, it’s curtains.

As Carl looks for his props in one of the mystery boxes placed around the room, a funny and disturbingly on point “commercial” for Trump Coal airs. Kicking off his immersion, Carl, adorned in a purple robe and crown, tells everyone, “We’re going to make Shakespeare great again.” Joining him on stage are assorted quasi-puppet stand-ins for political figures and members of the First Family. Ronald Reagan is the Earl of Kent, the most loyal of Lear’s friends, and here, a volleyball. Eric and Don Jr. are Regan and Goneril, Lear’s eldest, vicious daughters. Carl fittingly imitates Beavis and Butthead when they speak, explaining that nobody had laughed when he’d used regular voices. Cordelia, the youngest and most beloved daughter, is Ivanka, naturally. All three are represented by condiment bottles. It would spoil the show to say much more (and would be hard to really capture). But a few highlights include competitively eating a McDonald’s meal, Al Pacino as Lear, and a booze and condiments orgy.

Although it doesn’t detract from the abundant laughs, if you aren’t up on your King Lear, you may find the plot of Shakespeare’s play, such as it is here, a little hard to follow. Carl’s pace, which is brisk, could stand to be slowed down a little, especially given all of the characters and characters within characters. Michole Biancosino, who has collaborated with Carl on other shows, is adept at keeping the energy and craziness up without letting it spin into incomprehensible chaos.

This wince-inducing, utterly engaging production is a very limited run, but the good news/bad news is that at least until Captain Comb Over is impeached (fingers crossed), audiences will no doubt have more opportunities to catch the hilarious, madcap David Carl. Let’s just hope it doesn’t get him tossed in jail.

(Trump Lear plays at UNDER St. Marks, 94 St. Marks Place, through August 12, 2017. The running time is 70 minutes without intermission. Remaining performances are Saturdays at 2. Tickets are $20 and may be purchased at horseTRADE.info. Visit trumplear.com for more information.)