Created and Performed by David Carl (after Shakespeare);
Directed by Michole Biancosino 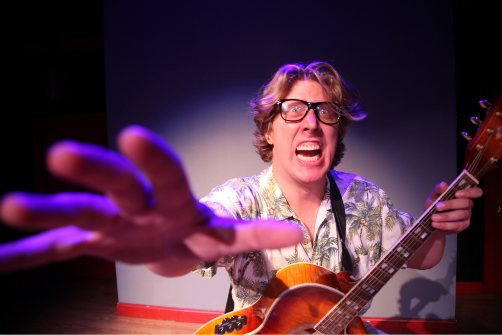 Just see it—it’s a freaking good time. Don’t deny yourself the demented guilty pleasure of seeing Gary Busey doing the entirety of Hamlet in just one hour. Yes, it’s that Gary Busey: well-remembered from dozens of screen gems, such as the nightmarish sadomasochistic Mr. Joshua from Lethal Weapon, or in his cameo as the manic highway patrolmen in Fear and Loathing in Las Vegas, or as Keanu Reeve’s FBI partner in Point Break. And who can forget his ballroom turn on Dancing With The Stars!? Yes, that Gary Busey does Hamlet. Or rather, it’s David Carl, performer and writer of Gary Busey’s One-Man Hamlet, who embodies the "out-there" auteur in a savagely funny and relentlessly fearless, pitch-perfect impersonation.

Among one of the top-ranking weirdest and intense celebrities, Busey could, arguably, out-crazy Nicholas Cage and would have no problem keeping up with all of Kat Williams’ recent shenanigans. A wild man on a mission, Busey is here “to prove that I’ve still got the chops!" Tackling the loftiest of the bard’s parts, Carl turns Busey's quest into an evening of sheer bombastic showmanship—paper dolls, finger puppets, projections, Busey’s own brand of modern art painting, “multi-media” fight simulations, and even a visit from the ghost of Buddy Holly, ala Busey’s rarely remembered, Oscar-nominated performance as the spectacled guitar-hero in the 1978 film The Buddy Holly Story. Busey goes all out in his rendition of the tragedy of the Danish prince, and at all times he talks directly to us. There is no fourth wall—there’s only you and Busey.

David Carl is a snarling, hillarious maniac. He keeps Busey intense and larger than life, but never over the top. Carl’s timing is spot on, relentless, and never over-indulgent. In his portrayal of the cult idol, David Carl finds gritty soul and howling truth. At the core of Carl’s caricature is Busey’s bustling and crazed desire to reconnect with fans. Gary Busey and Hamlet have lots in common, it turns out: one is forlorn and grasping with the purpose of his existence, and the other is a Danish prince. Now after “five decades of working in films” Busey must reevaluate what he's doing here, tonight, on stage before you.

There are moments that are breathlessly hilarious. Amidst all the Shakespeare, Gary Busey suddenly is compelled to deliver Bill Pullman’s famous speech from Independence Day with such ballsy and bust-out funny intensity that he literally has the audience on their feet by the end. Busey peppers all of his actions with commentaries; he tries to move on to a new act but then has to backtrack, saying “No, not yet, we’re still in the middle of the longest scene of any play written, ever.” Hamlet’s meeting with his Ghost Father—a projection played by, who else, Busey in ghoulish make up—is mesmerizing in its execution; their banter is razor-sharp and devilishly fast, and the whole exchange is gleefully ridiculous. In another moment, Busey parses out anachronistic commentary on using a wireless mic: “In Shakespeare’s times, Leonardo DaVinci had already invented the microphone—but no one had one.” All of these Busey-isms get us deeper into the mind of this strange energetic man, and that’s just where David Carl wants you to go. Carl gets you to understand Hamlet the way that Gary Busey does. Occasionally, we witness Busey backsliding, losing it and going to a dark place. “Come on, Gary…come on, Gary,” Busey quietly cajoles himself, as he's bent double, desperately trying to rev his internal engine back up to 100. David Carl is able to go from the intensity of a lit stick of dynamite to the vulnerability of a fragile, lonely child. The frenetic peaks and lows of Busey are the ultimate thread which binds his story to the Tragedy of Hamlet, Prince of Denmark—a younger man fraught with insecurity and indecision.

It’s no wonder that this show killed last year when it was at 59E59 Theaters, and why it did so well at Edinburgh Fringe just this past summer. The ride is just a ton of fun! Creator David Carl and director Michole Biancosino have strategically hit venues and garnered accolades, as they gear up to bring this tour de force  to Chicago’s Shakespeare Theater in time for their celebration of 400 years of the Bard. If you want to shamelessly laugh your brains out, grab a ticket to Gary Busey's One-Man Hamlet and enjoy the ride!