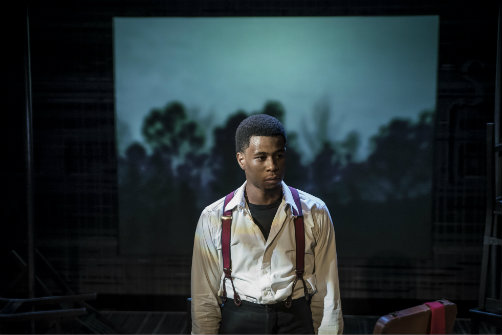 BOTTOM LINE: The acclaimed play about an African American man’s journey through time returns to New York in a powerful Off Broadway production.

What a difference two years make. When Freight: The Five Incarnations of Abel Green made its New York debut in 2015, the play’s examination of racism throughout the 20th century was sobering. Yet I felt hopeful, naively hopeful, that some of the terrible things Abel Green experienced, such as witnessing the aftermath of a lynching, or seeing the FBI burn down a Black Panthers clinic, would be resigned to history.

Flash forward to 2017 and the world has turned upside down. Donald Trump is President. White supremacists march through Charlottesville with tiki torches. The FBI’s terrorism unit declares “black identity extremists” a “violent threat.” Suddenly, the horrors Abel Green endured feel present and prescient. All this makes the return of Freight to the New York stage frighteningly relevant.

Freight tells the story of Abel Green (J. Alphonse Nicholson), a young African American man who experiences five incarnations across the span of one hundred years: a minstrel-show performer in the 1910s; a faith healer in the 1930s; an FBI informant against the Black Panthers in the 1960s; an actor in the 1980s whose friend is dying of AIDS; and a homeless ex-mortgage seller in the 2010s. In all his incarnations, he hops some kind of train to escape his life or build a new one—a freight train, a Pullman car, the Chicago L, the New York subway, a dream rocket to Saturn. The “freight” Abel must grapple with includes the oppressive weight of racism, the deception of former colleagues, and his own personal prejudices. 1960s Abel, for example, is thrilled to find steady work as an FBI “snitch,” but he’s horrified when he realizes his work is helping to destroy his friends. 1980s Abel experiences discrimination in Hollywood, reduced to playing thugs who die grisly deaths at the hands of macho white action heroes. This same Abel can’t feel any sympathy, at least at first, when his best friend comes out of the closet and is diagnosed with HIV.

Fittingly for a play about incarnations, this second New York iteration of Freight captures the essence of its predecessor while expanding (and improving) upon it. The proscenium space at the Castillo Theatre is larger and less intimate than the black box space of 2015, but director Joseph Megel brings the action out into the audience. At certain moments, Abel walks into the auditorium, interacting with patrons. He exhorts them to turn to praise Jesus at a church meeting in the 1930s, wheedles them with a vitamin sales pitch in the 1980s, or finds a precious soda can buried beneath the seats as the 2010s. Nicholson gives a tour de force performance as Abel Green, physically transforming into very different—yet somehow essentially the same—versions of Abel across the decades. He even gets to display his percussionist skills in a joyous paint-can drum solo at the play’s conclusion. Chris Cumberbatch’s economical set design, consisting of brick walls and freight boxes that transform into benches, allows for seamless transitions, while Gail Cooper-Hecht’s eloquent costumes evoke the different places and times of Abel’s journey. Eamonn Farrell’s stunning projection and sound design complete Abel’s world with evocative photographs, original imagery, and era-appropriate music.

Howard L. Craft’s eloquent script sails through one hundred years of history. Suitably for a play that jumps through time, characters loop in and out of Abel’s existence as recurrent archetypes. Willie Benson, an African American actor who performs in blackface to survive, takes the young Abel under his wing in the 1910s, while William Benson, paternal FBI agent, mentors Abel in the 1960s. Both men aren’t quite the kindly father figures they seem. Meanwhile, a Wilma Benson rescues a distraught Abel in the 2010s, only to disappear. Pretty Mary Bingham starts 1930s Abel on his path to faith healing, while nurse and dedicated Black Panther member Mary Bingham falls in love with 1960s Abel. All these characters are emblems of their era while still being individual, specific people (though beatific, pure, saintly Mary veers toward cliché). If anything, I wanted to see more from the female characters along Abel’s journey, and to have more variety among the women he encounters. Craft's script never stints, however, on its unflinching look at racism, and the strategies Abel adapts to survive. In all, this is a timely and timeless theatrical journey.

Freight: The Five Incarnations of Abel Green is by Howard L. Craft. Directed by Joseph Megel. Set Design is by Chris Cumberbatch. Costume Design is by Gail Cooper-Hecht. Lighting Design is by Antoinette Tynes. Sound and Projection Design is by Eamonn Farrell. Stage Manager is Bayo.

The cast is J. Alphonse Nicholson.