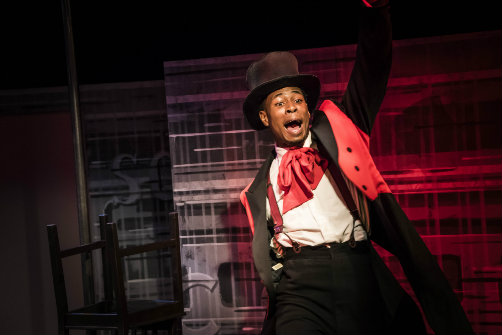 BOTTOM LINE: An unadorned series of glimpses into the black experience throughout American history.

As I took my seat for Freight: The Five Incarnations of Abel Green, I was serenaded by the sweet strains of Wu-Tang Clan’s “A Better Tomorrow.” I couldn’t help but wonder whether the play, which centers on a black man existing “in five different dimensions of the same universe at different points in American history,” would portend a better tomorrow, or serve to highlight our country’s ongoing struggle with violence and racial strife. The answer, I soon discovered, was neither. I expected a parable. What I got was a story.

The play opens with a dreamlike flight through space, indicated by stars projected on three panels that span the stage. The work makes liberal use of these projections throughout in order to supplement the otherwise minimal set. The action starts when J. Alphonse Nicholson, each of the titular Abel Greens and the piece’s sole performer, stumbles onto a projected train car. We quickly realize the origin of the title—each of the five incarnations of Abel Green will be his own version of “freight,” riding a train car to, from, or within a given city or town.

This first Abel Green is a minstrel—one half of the traveling “Captain Davenport’s Minstrel Troupe.” In a monologue incorporating minstrel songs and jokes, this Green tells of his partner William Benson’s death and defends his own pride in being a minstrel, the latter of which stems from his ability to elicit laughs from the same people who routinely lynch his black brethren. This Abel Green’s story gives way to that of a preacher-turned-porter, who boldly takes the stage by proclaiming that Jesus was black. Preacher Green’s story contains some of the same elements as minstrel Green’s, indicating the interconnectedness of all five incarnations. William Benson, previously minstrel Green’s deceased partner, is now the deceased founder of Green’s beloved Church of Revelation. Alonzo Price, previously minstrel Benson’s cousin and the real “Captain Davenport,” is now a ruthless and calculating charlatan who nearly kills preacher Green for exposing his scheme.

Another flurry of projections (including photos of the Nation of Islam and Muhammad Ali) takes us into incarnation number three—Black Panther Abel Green. This Green, in a stocking cap and leather jacket, begins by scanning his empty train car and briefly taking a gun out of his bag. He goes on to tell us of his FBI recruitment (by special agent William Benson, of course) to spy on the Black Panthers. All is going according to plan until he falls in love with beautiful Panther Mary Bingham (whose doppelganger preacher Green miraculously healed in the previous incarnation). His loyalties split, Panther Green attempts to save Mary, but fails. By the end, he’s trying to exact revenge on the FBI...if the Panthers don’t get him first.

Abel Green number four takes the form of a disillusioned actor. After starring in such Blaxploitation masterpieces as The Revenge of the Killer Pimps and Take Back the Streets, actor Green decides to quit, opting to help sell fitness products with—surprise, surprise—Alonzo Price. The William Benson in this story is an old friend of actor Green’s, one that introduces him to a complicated facet of life in the eighties: AIDS. William’s condition forces actor Green to confront his own prejudices as he watches his friend succumb to the horrible disease, and eventually leads actor Green to a kind of enlightenment.

The story of incarnation five—broker Green—is no less revelatory. This Green is dressed in rags, and wheels a cart full of trash bags, clearly identifying him as homeless. He tells us of his prior life selling subprime mortgages to poor minority families, and of his near death at the hands of disgruntled former homeowner Alonzo Price. After a mysterious woman (Wilma Benson) saves his life, he decides to sell his house and all of his belongings and live on the streets, in the hopes of building a spaceship to take him to Saturn.

In each of Abel Green’s five incarnations, there is something to be learned, be it about conscience or trust or who will survive in America. Ultimately, however, writer Howard Craft and director Joseph Megel seem primarily concerned with presenting each Abel’s story without comment. They touch on some major aspects of different eras—the Pullman Porters, the Black Panthers, AIDS—but each Abel Green exists almost out of time. Aided by J. Alphonse Nicholson’s strong and varied performance, the man is shown as just that: a man. A black man. In America. He sees death and moves on. He feels love and moves on. He ruins and is ruined. He doesn’t have a grand plan, he simply does the best he can given the circumstances.

In a way, black or white, rich or poor, we are all Abel Green. Especially in New York, riding the subways with thousands of others each day, we could all be touched by love or death or disease at any moment. We all want to find our identity, to entertain, to make money, but we could just as soon leave it all behind and shoot off to Saturn. It is in this universality that you’ll find the heart of this play. Nothing in this 90 minutes is overly flashy, or exceptionally funny, or terribly moving, but it is genuine. It sets out to tell a story, and it tells one. One that may as well be five, or 500, or 5 million. One just as relevant today as yesterday...and even more so tomorrow.

(Freight: The Five Incarnations of Abel Green plays at HERE Arts Center, 145 Sixth Avenue, through August 9, 2015. Performances are Tuesdays through Saturdays at 8:30 and Sundays at 4, with an additional performance Saturday, August 8th at 4. Tickets are $18 and are available at here.org or by calling 212.352.3101)