No financial transaction is required, though a reservation is suggested

To reserve your seat, visit fluxtheatre.org 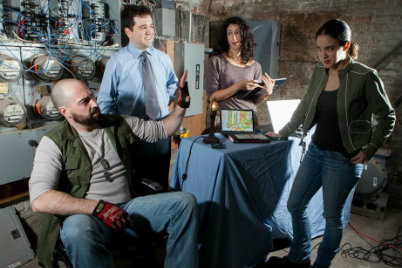 BOTTOM LINE: Flux knocks out another intelligent, entertaining play that makes great use of its set, passes the Bechdel Test, and highlights a talented cast.

Flux Theatre Ensemble has become one of my favorite companies in New York. Their commitment to crafting interesting, thoughtful shows has produced memorable results. Last year’s double whammy of Jane The Plain and Once Upon a Bride There Was A Forest has solidified Flux, in my opinion, as one of the most indispensable companies of the indie theatre scene. I’m not alone in my estimation, as Indie Theater Now recently dubbed Flux as one of their People of the Decade.

In a New York City reeling from the devastation of a nation-wide disaster, a group of government-mandated “Searchers” are tasked with the recovery of sentimental items. Music boxes, pieces of jewelry, thousand dollar bottles of scotch: they are all to be found, scanned for toxicity and catalogued while humanity recovers. Akiko (Rachael Hip-Flores), the group’s best Searcher, drives herself to exhaustion uncovering the city’s lost treasures as she clings to a snippet of an ancient Japanese poem. Her coworkers Noma (Sol Crespo) and Mandy (Mike Mihm) deal with a looming sense of futility by losing themselves in sex and sarcasm, challenging their socially-challenged boss' (Isaiah Tanenbaum) strict set of rules.

Schulenburg has a gift for world building. His take on a dystopian Manhattan is unique but grounded in believability. He is aided by the impressive attention to detail provided by set designer Will Lowry. Lowry takes the modest Losaida Center performance space and transforms it into a lived-in office/lounge. At intermission, audience members may step onstage and explore the set in depth. The pitifully cheery safety posters adorning the walls add an element of dark humor to Salvage's underlying tragedy.

Director Heather Cohn, whose previous work with Flux includes the rapturous Once Upon a Bride… wrings beautiful work from her ensemble. Hip-Flores’ Akiko is the heart of Salvage and the actress acquits herself with subtle humor and melancholy. Crespo’s Noma is both heartbreaking and funny; the engaging spice to Hip-Flores' soulful sugar. She is matched nicely with Mihm, whose work as the paraplegic Mandy is some of the most technically impressive physical acting I've ever seen. Tannenbaum is very effective as Akiko's smitten boss, Dennis. When he and Hip-Flores share an awkward cuddle on the office couch, it is one of the most weirdly moving non-love scenes I have ever seen.

Salvage is a unique and lovely play: another artistic "win" for Flux Theatre Ensemble. With their new Living Ticket initiative, I hope a much wider audience will be able to experience this very special company.

(Salvage plays at The Loisaida Center, 710 East 9th Street, now through April 25, 2015. Performances are Mondays through Saturdays at 8PM. Tickets are available through Flux's Living Ticket initiative; no financial transaction is required, though reservations are strongly recommended. To reserve your seat, visit fluxtheatre.org.)