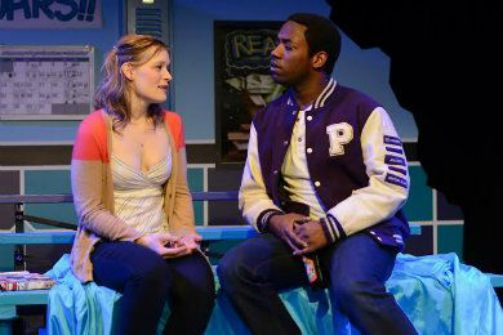 Alisha Spielmann and Chinaza Uche in Jane the Plain. Photo by Deborah Alexander.

BOTTOM LINE: A weird, funny, and fantastical look back at high school life.

Is there no fresher hell than high school? Is there any other time in a person’s life when they feel as vulnerable and mercurial, experience such high highs and crushing lows?

No. No, there is not. That’s why we all came here. That is why we all got as far away from that as possible to disappear into a New York City crowd. That is what I tried to do, at least, and I thought I was safe. I thought I had put the humiliations and histrionics of my teenage years far behind me until this past weekend when I saw Jane The Plain.

At Plainview High -- a fictional school “in a state far enough from the coast that lakes are all you have to swim in” -- students encase themselves in their roles as if they were padded armor. There’s Scotty the Hottie (Chinaza Uche), Betty the Pretty (Becky Byers), Lexi the Sexy (Sol Crespo) and Leeson the Decent (Chester Poon) who occupy the upper echelons of popularity; and then there is Leonard the Awkard (Isaiah Tanenbaum) who does not. Somewhere in the middle falls Jane the Plain (Alisha Spielmann), an everygirl who wears her emotions on her sleeve. Jane yearns for Scotty, so much that any of his casual compliments would bring her to the heights of emotional ecstasy (there but for the grace of God return I). Jane would do anything to feel affection from Scotty, no matter what the consequences.

One hastily sent “sext” sets in motion events that would change everything for Jane, but not in the way that you would normally expect. After Jane suffers the taunts and “slut shaming” from her peers she experiences a supernatural event that gifts her with unearthly beauty. Oh, how the tables turn then.

Jane The Plain starts off feeling like a bit of an afterschool special (hey kids: don’t send naked pictures of yourself!) then becomes a fairytale, and while playwright August Schulenburg has great fun twisting dramatic expectations he enjoys deconstructing teenage character stereotypes. The football hero’s cocky seeming confidence masks existential dread, the over-achieving cheerleader is driven by sadistic impulses, the hottest girl in school does not understand her own desires, and so on. Schulenburg strips the cushy armor off his characters to reveal their own raw humanity, but the playwright’s playful prose and idiosyncratic humor make the transitions seem refreshing. The students of Plainview are ridiculous, but humanly so, the way real teenagers are.

Director Kelly O’Donnell gives Schulenburg’s text the production it deserves. She incorporates elements into the staging that are almost dance-like but with enough rough energy to make it seem natural. She makes the most of a simple set (five lockers and a set of bleachers, designed cleverly by Will Lowry) and finds wonderful compositions for her nimble cast.

As Jane, Spielmann shines with an aching vulnerability. She perfectly captures the open, easily wounded heart that beats within every teenage girl. Her performance was so good it made me a little uncomfortable. Watching Spielmann reminded me of many a painful blunder in my own adolescence, and that can be a hard place to revisit. Still, Spielmann is very likeable and she anchors a very strong cast with her honest and passionate work.

Uche was another standout in the show. His portrayal of Scotty -- which perfectly encapsulates the amiable sociopathy of a young Alpha male -- earned some of the biggest laughs of the night. Poor Scotty is as clueless as he is careless, but Uche has charm to burn making his actions if not forgivable then at least palatable. Equally strong is Byers, who takes the role of high school overachiever and turns it up to a vicious eleven. Crespo gives a soulful turn as the mysterious class beauty and Tanenbaum is perfectly cast as a lovesick outsider. Poon is enjoyable as nice guy Leeson.

Jane The Plain takes turns for the fantastic, but is firmly rooted in the agony and ecstasy that was and will forever remain in the realm of high school. It is a place not many of wish to return to, but Jane The Plain is worth a visit.