Off Off Broadway, New Play
Runs through 3.9.14
Theater for the New City, 155 First Avenue 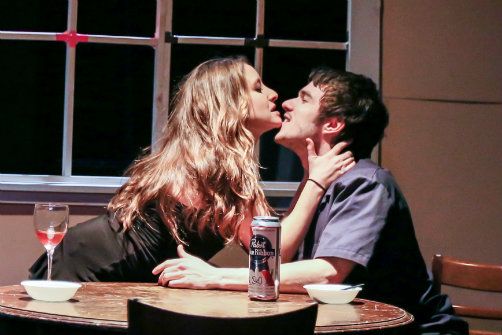 BOTTOM LINE: An awkwardly-staged but talent-filled show about a stripper whose life (and house) is on the verge of disaster.

The protagonist of Versailles, Richard Ploetz’s new play presented by Nedworks at Theater for the New City, is a stripper. But there isn’t any pole dancing or panty tossing on this stage. If you’re looking for that kind of action, look elsewhere (Showgirls: The Musical will hopefully come back). Versailles is about everything that happens outside of the strip club and the complicated, teetering life of a woman who works there.

The story is set in the home of Sharon (Charise Greene), a woman who has just managed to squeak past a haunting childhood, drawing on her sexuality to connect with everyone around her and to make a rather successful career stripping. Her situation, though, is a precarious one: her boyfriend Brandon (Drew Ledbetter) is a skeezy mooch (and the father of her child, who is conspicuously missing); her father Harmon (Nick Ruggeri) is getting too close for comfort with her child, reopening Sharon’s own deepest wounds; she’s having sex with her boss at the strip club, Nick (Ron Bopst); and her married neighbor, Bob (Eric Chase), unwittingly dangles his seemingly stable life in front of Sharon like a big juicy carrot. To top it off, her house, (part of a cheaply built sub-division called Versailles) may be sinking into the swamp upon which it was built.

As Sharon uses her sexual charms to negotiate each of these relationships, she finds herself sinking, much like her house, into a mucky mess and gripping anyone with a shade of stability as a possible escape.

There’s a lot to this story and I suspect that Richard Ploetz’s script is more brilliant than it came across in this particular production. In the press release, Versailles is described as “filmic, with short scenes and jarring movements. Rapid cuts propel us through a broken story.” In the staging, this translates to many short scenes that end rapidly in order to cut to the next. But, while these sort of abrupt cuts do work well on film, here it leaves us with a lot of down time as the actors take time to reposition themselves in the dark for the next scene; the momentum that this style intends to build instead deflates.

The staging within the scenes, too, is often rife with emotion and abruptness. While this makes sense given the content of the story, I found it to detract from its believability and, combined with the rapid-cut style, a feeling of awkwardness pervaded.

Some of the actors thrive in spite of this. Bopst inhabits the character of Nick beautifully, bringing a sympathetic note to the prototypical sleazy strip club manager. Charlie Moss is even better as Mr. Mason, whose character is (I think) imaginary, and appears at key moments to help Sharon think through her problems, offering complex and poetic anecdotes. Elizabeth Bell also soars as Beth, neighbor Bob’s buttoned-up wife who unravels into a comi-tragic drunken mess when she realizes that Sharon is sleeping with her husband, but also loosens up in a beautiful and unexpected way.

The person who really nailed it, though, is the costume designer Reojendra Adams. In some cases, her attention to detail does as much to bring these characters to life as the actors do. Nick’s burgundy silk button-up screams “strip club manager!”, Brandon appears in various staples of the blue-collar wardrobe (a mechanic’s jumper, a Miller High Life shirt with the sleeves cut off), and Mr. Mason looked strikingly similar to my late grandfather -- a style that is rather specific to casual older men in the Sunshine State. Even when the characters seemed to get lost in the highly stylized staging, they were at least perfectly themselves on a visual level.

In a weird way, Versailles the play is kind of congruous with its own protagonist. There’s something charming and alluring about it, but it’s weighed down by a complexity that, I think, stands in it’s own way. With so much talent involved, you don’t want to watch it just sink into the muck.

(Versailles plays at Theater for the New City, 155 First Avenue, through March 9, 2014. Performances are Thursdays through Saturdays at 8PM and Sundays at 3PM. Tickets are $18, $12 for students and seniors, and are available at brownpapertickets.com or by calling 212.254.1109. More information at nedworksproductions.org.)