NOTE: Review is from earlier off off Broadway run at The Kraine Theatre 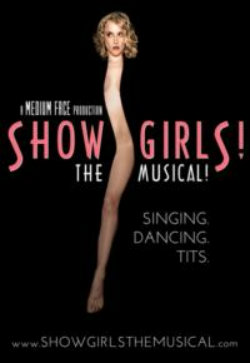 If you need a refresher, Showgirls was the 1995 big budget, rated NC-17 flop that had every intention of launching Elizabeth Berkely from teen actor (famous for her role on Saved by the Bell) to full-fledged stardom. Upon its release, the confident aspirations of the filmmakers were swiftly smashed by across-the-board bad reviews and dismal box office sales. In the 18 years since its release, however, Showgirls has cultivated a rather dedicated following of fans who appreciate its blatant over-acting, ridiculous characters and storyline, dizzyingly flashy aesthetic, almost constant nudity and, of course, it’s not-so-heroic heroine Nomi Malone, the character whom Berkely delivered with spunk and melodrama that is nothing short of legendary (and effectively blacklisted her from Hollywood).

Showgirls! The Musical!, the latest offering from MediumFace productions (responsible for Bayside! The Unmusical and JonBenet Ramsey: Murder Mystery Theater!!!) is written with those fanatics in mind and assumes a familiarity with the film on the part of the audience. The play generally follows a tightened version of movie's plot, sometimes transforming scenes into musical numbers, and offering an almost constant commentary on what makes Showgirls such a strange and fascinating piece of cinema.

Generally, Bob and Tobly McSmith’s script is decent enough. It takes the time to focus on some of the film's most ridiculous moments (there are a lot to choose from) and strikes a good balance between reconstruction and parody, but for it’s apparent familiarity with the film, the script also falls short at key lines, as if the writers didn’t take the time to check their final draft against the film itself (a problem when your target audience knows every line). My major qualm with the writing, though, is the character Gay (played by Philip McLeod), who is based on the character of a choreography coach. In the film this is a small part, but here Gay becomes one of the most prominent characters on stage and is an unfortunate conglomeration of gay stereotypes that we’ve all seen a bazillion times before. As a result, he is far less interesting than the other characters whose roles are more directly drawn from the film. It feels like the writers decided to “gay it up” (it is a stage musical after all) but, in doing so, detracted from the show’s otherwise fresh feel and subtracted valuable time from making direct references to the Showgirls' goldmine of material. I, for instance, would rather have seen more of Penny (Amanda Nichols), whose small role in the movie is magnified by the fact that the actress who played her (Rena Riffell) went on to write, direct and star in the straight-to-DVD sequel.

That said, any shortcomings in the script are made up for tenfold by key performances. Rori Nogee and John Elliot bring both character authenticity and comedic originality to their characters Cristal Conners (Gina Gershon in the film) and the character Kyle MacLachlan plays (yeah, I don’t remember his name), respectively. Marcus Desion is hilarious in both of his roles as Nomi’s best friend Molly and as her dancing coach/attempted seducer James, differentiated by sometimes on-the-fly wig changes. The chorus showgirls (Amanda Nichols, Natalie Wagner, Israel Vinas) are all versatile and fun to watch.

The anchor and the star of this show, though, is April Kidwell as Nomi Malone. Kidwell is perfect for the part, not only for her physical likeness to Berkely, but also because she finds just the right style to parody the character of Nomi. This is more challenging than it may seem; with Nomi’s already hot temper and fiery sexuality, it would be easy to either overshoot or simply imitate Berkley. Kidwell, however, makes Nomi her own, and shows off her broad range of comedic acting skill in everything she does — from twirling on a pole to thrashing in the club, from singing the numbers to violently handling a tray of french fries. Kidwell is a comedic force with a seemingly endless supply of energy and expressiveness. I wouldn’t be surprised if she turns up on the regular cast of Saturday Night Live. In fact, these days SNL could probably use her just as much.

Throw in some catchy and hilarious musical numbers, choreography (Jason Wise and assistant Laura Henning) that, like in the movie, is consistent through all the yanky-janky dance numbers and hyper-drive strip teases, and perfectly dazzling if low-budget costumes (Marcus Desion) and Showgirls! shapes up to also be a full-fleshed stage musical, teeming with energy.

If you’re a fan of Showgirls (If you can’t tell, I am — it’s the movie I turned to for comfort when the ConEd plant six blocks from my apartment exploded during Hurricane Sandy) then I can’t recommend Showgirls! The Musical! enough. Most of the required elements are there and the most important — a hot iron Nomi — couldn’t be hotter. If you haven’t seen it and are curious, I’d recommend watching the movie first. Though even if you skip the movie, April Kidwell will probably keep you laughing for days.

(Showgirls! The Musical! plays at XL Nightclub Cabaret & Lounge, 512 West 42nd Street, through July 17, 2013. Performances are Wednesdays and Saturdays at 8PM. Tickets are $20 and are available at showclix.com or by calling 212.239.2999. For more show information visit showgirlsthemusical.com.)