Written and Directed by Eric Simonson 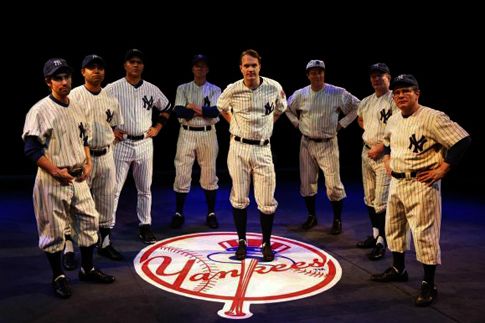 A scene from BRONX BOMBERS. Photo by Jane Marcus.

It’s June 1977, a tough summer for New York with a fiscal crisis, Son of Sam terrorizing the city and the Yankees on the brink of collapse as they fight the Red Sox to stay in the pennant race. Team coach Yogi Berra (Peter Scolari) has gathered three key Yankee figures – Captain Thurman Munson (Bill Dawes), superstar Reggie Jackson (Francois Battiste) and manager Billy Martin (Keith Nobbs) to his Boston hotel room. It’s his attempt to broker the peace following a dust up the day before between Martin and Jackson when Martin had pulled him from the game for a “lack of hustle” in right field. The meeting leaves everything unresolved and has Berra, Martin and Munson even more distressed about the state of the team.

Scolari, who I saw earlier this season in a radically different dramatic role at The Flea (in A.R. Gurney’s Family Furniture), brings affection, warmth and humor to the iconic sports figure. Famous for his malapropisms, Berra has multiple opportunities to drop them into the action such as, “I may be nostalgic, but that don’t mean I like to live in the past.” The audience, of course, ate it up. As Berra, he supplies a dose of thoughtfulness amid the larger-than-life personalities of Jackson with his “immensity” and the alcoholic hothead Martin who wails about Steinbrenner firing him and complains that “everything I do he’s agitating me!”

Battiste is full of anger and cocky swagger in his shades and corduroy suit, demonstrating why Jackson, despite his batting stats, is the one the crowd comes to see. Similarly, Nobbs captures Martin, making an entrance in his all black ensemble (cowboy hat, leather jacket and boots) with a case of the shakes as he pours coffee and practically froths at the mouth about Jackson. He earns knowing and deserved laughs for the portrayal. Dawes has the much less showy part as the laconic, no-nonsense Captain who relishes calling Jackson “asshole” twice. Dawes so effectively disappeared behind his mustache that I didn’t realize until after the show that he was also doing double duty (like much of the cast) in the second act as the boozing, combative Mickey Mantle.

The second act, a dream or fantasy sequence with shades of a certain Kevin Costner baseball movie, has various Yankee legends coming to dinner at Yogi and Carmen Berra’s (Tracy Shayne) New Jersey house. There’s the Babe (C.J. Wilson), possessed of that distinctive booming voice and enormous nose, clad in a fur coat and carrying a half dozen bottles of Scotch as he tries to ferret out some hotdogs. Also along for awe and inspiration are the quiet and graceful Elston Howard (Battiste), the first black player on the Yankees, Lou Gehrig (John Wernke), tinged with a wholesomeness and sadness, Joe DiMaggio (Chris Henry Coffey), the only one to refuse to put on the pinstripes and Mantle (Dawes), eager to spar with the uptight Mr. Coffee pitchman. And for good measure and a voice of clarity and calm from the future, Derek Jeter (Christopher Jackson) also joins the party.

The set up will have audience members either embracing the magical, sentimental aspects of seeing greats like Ruth and Gehrig on stage or yearning for the cracking energy of the naturalistic character-rich first half. Although I was in the latter camp, judging by the reaction of those around me, who eagerly posed in the lobby for photos with blow ups of the old timers, I’d say that for many, seeing the stand-ins for their favorite yesteryear players was worth the price of the ticket.