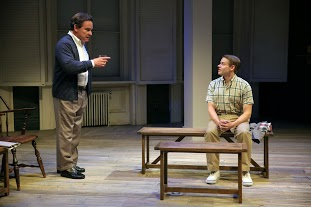 BOTTOM LINE: An Updike-esque take on marriage and family.

This fall, the tiny Flea Theater is home to the world premiere of A.R. Gurney’s new drama about family relations. A prolific playwright (Love Letters, Sylvia, The Dining Room), Gurney, who recently turned 83, has seen his works performed for more than a half century.

Set during 1952 in Buffalo (which incidentally is where Gurney was born), the play revolves around a seemingly perfect upper-class nuclear family spending time at their summer house, WASPS being right in his wheelhouse. Russell (Peter Scolari) and Claire (Carolyn McCormick) have been married for 26 years and have two grown children, Nick (Andrew Keenan-Bolger) and Peggy (Ismenia Mendes). Rumours of an affair between Claire and a longtime friend set the story in motion as each character reacts. Nick, a college boy dating Betsy (Molly Nordin), a Jewish girl, had expected to spend his days house painting to make enough cash to buy a car, and finally having a long awaited night alone with his girlfriend. Peggy had been contemplating marrying her Italian-American boyfriend. This is much to the consternation of father who has a conservative streak and whose roots go back centuries. Russell believes Italians to largely be “gangsters and politicians,” and refers to FDR as that “rascal Roosevelt.” Claire, on the other hand, is much more free spirited and hopes that her daughter is having sex and enjoying being young.

Interestingly, it’s Nick who is most affected by his mounting suspicions as he grows angrier over the weeks, deciding against buying a car after he believes a check his mother gives him for it is a bribe. And he walks away from the lucrative house painting after getting into a fist fight with a friend/co-worker. Peggy chooses to bury her head, coming up with possible alternatives to explain their mother’s absences, and escapes to Italy for a trip organized by her father to get her away from her boyfriend. Russell is harder to read, sharing memories with Peggy of a long ago romance before he’d wooed Claire, comfortably sitting down to a relaxed evening of cocktails with his wife and offering unconditional support to his daughter when she returns from Italy and might be pregnant.

It’s safe to imagine that Russell and Claire will after so many decades together resume their regular married lives come fall when they’re back at home, with secrets kept. And Peggy picks up as if she had never gone to Italy. But with Nick -- the most carefree and innocent of the lot -- the odds that he will easily carry on are less likely after he’s seen the lies the rest of them maintain as he is suddenly confronted with adulthood.

Although the subject matter doesn’t tread new ground, Gurney presents a thoughtful critique of mid-20th century WASP mores and what goes on behind the tennis matches and society lunches. The cast is uniformly strong and the most compelling aspect of the production. I’d been curious to see Scolari, who most audiences will only know from his comedic work on Bosom Buddies, Newhart and Girls. He acquitted himself nicely in a dramatic role that had notes of wistfulness and compassion. But Keenan-Bolger, a theatre actor most recently seen in Newsies -- whose character experiences the greatest struggle and emotional evolution -- was especially engaging.