Based on the Novel by Michael Morpurgo; Adapted by Nick Stafford
Directed by Marianne Elliott and Tom Morris 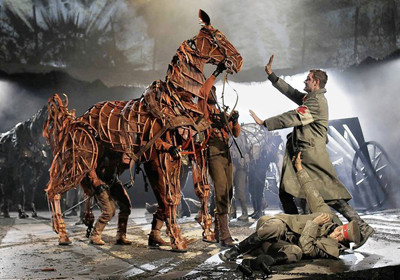 There is no denying the fact that all of the “human” actors in War Horse perform wonderfully in their respective roles as the soldiers, farmers, brothers, husbands, wives, fathers, mothers and sons who lived, loved, worked and fought in France and Germany during The Great War (World War I). They are all splendid actors and their portrayals are terrific across the board. And yet, they all must take a back seat to the true stars of this spectacular multi-media production, Joey and Topthorn, two larger than life equine puppets (and, of course, Joey and Topthorn’s creators, Adrian Kohler and Basil Jones, and the several different puppeteers who manipulate them on stage). For it is Joey and Topthorn who dominate this play from beginning to end -- and who are the primary reason that you not only should make every effort to see this production yourself but the reason that you should try to bring your whole family with you to see it as well.

War Horse is an epic tale of the lengths to which Albert Narracott (Seth Numrich), a young boy, will go to be with Joey, the horse he loves. When, in the course of World War I, Albert’s father Ted Narracott (Boris McGiver), betrays his promise to his son by selling Joey to the British Army (which ships the horse to France to serve in the cavalry), Albert runs away from home to join the Army in his quest to recover the animal -- which, at one point, is stranded in the no-man's land between the German and British armies.

The story itself is exciting, adventurous and likely to be enjoyed by children and adults alike. But it is also much more than that. It is a story of honor and deceit, of man’s humanity and inhumanity to his fellow man, of children and adults, of mothers, fathers and sons, of envy and petty rivalries, of bravery and cowardice, of the horror and futility of war; in sum, of everything that makes man what he is, for better or for worse. And what makes the play so remarkably expressive is that much of this is depicted through the incredible movements of those larger-than-life puppets on stage, interacting with human actors against the backdrop of a creatively designed set incorporating dramatic black and white film, excellent choreography and striking special lighting effects.

The play premiered at the National Theatre of Great Britain in 2007 before moving to London's West End in 2009 where it is still running. This American production utilizes the same creative team that was responsible for the London production but engages an all new American cast. One may only hope that this production, too, will have a long, extended life in the states.

(War Horse plays at The Vivian Beaumont Theater at Lincoln Center, 150 West 65th Street. Performances are Tuesdays at 7PM, Wednesdays at 2PM and 8PM, Thursdays and Fridays at 8PM, Saturdays at 2PM and 8PM, and Sundays at 3PM. Tickets are $75-125 and are available at www.telecharge.com or by calling 212.239.6200. For more show information visit lct.org.)