Based on the novel by Robert Louis Stevenson
Adapted for the stage and directed by Vernon Morris and B.H. Barry 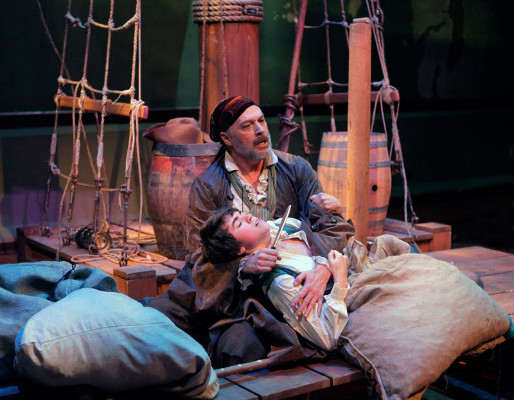 Although modern footage of pirates involves machine gun-hoisting adolescents in speed boats off the coast of Somalia, most of our popular notions of piracy conjure up images of one-legged ruffians and their irreverent parrots, treasure maps where “X” marks the spot, and mutinous sailors walking the plank to their doom. We owe most of these perceptions to Robert Louis Stevenson’s 19th century adventure novel Treasure Island, and so it is not surprising that Vernon Morris and B.H Barry’s staged effort of the story at the Irondale Center in Brooklyn seems wonderfully familiar, even if you haven’t read the book.

Treasure Island tells the tale of young Jim Hawkins (Noah E. Galvin), who finds himself thrust into a life-changing adventure when he comes into possession of a map showing the whereabouts of the huge booty of Captain Flint, “the blood-thirstiest buccaneer that ever lived,” collected over a lifetime of terrorizing the seas. Together with Dr. Livesey (Rocco Sisto) and Squire Trelawney (Kenneth Tigar) they manage to fleet a ship, the Hispaniola, and with its crew they set sail in search of the treasure. However, the crew on board happen to be a band of brigand pirates who have their own plans for the treasure, setting the tone for an adventure-filled story full of mutiny, rum-driven drunkenness and battle-it-out-to-the-end sword fights. Long John Silver (Tom Hewitt), the one legged pirate, also adds a little substance to the tale as both a loathed villain and an endearing old sea-dog, leaving the audience to pronounce verdict on his character.

Morris and Barry (who won a 2010 Tony Award Tony Honor for Excellence in Theatre) do a great job in the staging of this play with an obviously modest budget. The set is convincingly converted from firm British land to the Hispaniola’s deck and then to a cave, with just a shuffle of a few barrels and platforms. The technical aspects of the play are also impressive, with the sound and lighting easily conjuring up storms, waves and canons, accompanied with some actual explosions coming from the pistols (bring those ear plugs!). The visual effects are also impressive. A memorable moment is when the Hispaniola, swaying under the wrath of a storm, sees a drunken sailor “accidently” going overboard with a wonderful bound through a blue curtain.

There are, however, a few caveats worth mentioning. This play is definitely more about the story and its accompanying action than it is about the individual characters, which translates into somewhat unpolished acting at times, strange accents and rushed dialogues. This, together with the grimy interior and the peeling walls of the Irondale Center, give an overall impression of a production that is somewhat rough around the edges, and makes it fall short of being a universal crowd pleaser. The story is also a long one, spanning about two and a half hours, which can become tiresome towards the end, especially for those attending with young kids.

Overall, Treasure Island is an enjoyable family-friendly play, reasonably priced, and with a lot of catchy songs and tunes. If you’re open to theatre out of Manhattan, your exploration will be rewarded, and I can almost guarantee that you’ll leave the theatre humming “yo, ho, ho, and a bottle of rum.”

(Treasure Island plays through March 26, 2011 at the Irondale Center, 85 South Oxford Street, at Lafayette Avenue, Fort Greene, Brooklyn. Performances are Mondays and Tuesdays at 7:30PM, Wednesdays at 2PM and 7:30PM, Thursdays and Fridays at 7:30PM, and Saturdays at 3PM and 8PM.  Tickets are $15-$45.  To purchase tickets visit ovationtix.com and for more info visit irondale.org.)