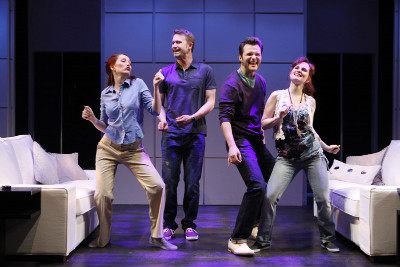 The dynamics of straight relationships have been so thoroughly mined by contemporary Off Broadway musicals (i.e. The Last Five Years; I Love You, You're Perfect, Now Change) that one could be excused for casually dismissing Tomorrow Morning. That would be a mistake.

The latest mainstage offering at the York Theatre, Tomorrow Morning is a careful and tender look at two relationships over the course of one evening. For the first couple, the next morning is their wedding day, and the start of their new life together. For their second couple, the next morning brings their marriage to a conclusion, when they sign their divorce papers. The juxtaposition of these two couples' journeys—one at the beginning of a marriage, one at the end— may sound slightly clichéd or even painfully obvious. But in this piece, the two parts fuse together to create a richly layered narrative and compelling evening.

Tomorrow Morning is nearly entirely sung-through; the catchy score by Laurence Mark Wythe is very much in the spirit of Jason Robert Brown. Wythe, one of the UK’s leading emerging creators of new musical theatre, pens the book as well as the score. Wythe delivers wildly energetic, peppy songs sung by all four characters, like the opening number “Everything Changes,” and “The Secret Tango.” These ensemble pieces are mixed with more beautifully introspective ballads, such as the penultimate number “Self Portrait,” and the preceding “Look What We Made.”

While the show soars when we are witnessing the two couples during the big evening, Tomorrow Morning becomes slightly muddled whenever we leave that particular night.  “I Remember,” a number where the couples chaotically cover and uncover the couches while donning painting smocks, is confusing, perhaps intentionally. In another number, the two couples compete on an imaginary game show. This song, while clever in concept and with smartly written lyrics, is strange and a bit ill-fitting for the general dynamics of the piece. These exceptions aside, Tomorrow Morning moves at a refreshingly quick pace and the strength of the piece as a whole excuses the momentary lapses in clarity.

D.B. Bonds and Mary Mossberg, as the older couple Katherine and Jack, bring to their performances a well-crafted aura of maturity, and at the same time a rich sense—particularly in Mossberg's case—of vulnerability. As the dewy-eyed younger couple, Matthew Hydzik and Autumn Hurlbert exude—as their characters should—a palpable feeling of nervous uncertainty and excitement for the future. Shows can easily fall victim to a lack of connection and chemistry between couples, but the couples here are so well-matched that audience members will likely find themselves strongly engrossed in these two relationships.

The stark white set, designed by Dan P. Conley, looks like a cabinet showroom display at first, but works ingeniously to expand the dimensions of the small space. By easily opening a panel we are transported to another location. When closed, images are at times projected onto the white cabinets.

A show of this nature runs the risk of too much sentimentality, too much sugary sweetness when painting the portrait of budding love; conversely, it can fall into too much bitterness or rancor of love lost. Tomorrow Morning wisely avoids these two extremes by presenting a deeply honest and creatively layered portrait of the different prospects of what the next morning might bring. We connect to these characters and their story in a strong way, so that when tomorrow morning actually arrives, we feel like we have traveled on a significant journey and are filled with wonderment of what the future holds.

(Tomorrow Morning plays at The York Theatre Company, 3619 Lexington Avenue on the corner of 53rd Street, through April 23, 2011. Performance schedule varies. Tickets are $67.50. To buy tickets, and for more information and the complete performance schedule, visit www.yorktheatre.org, or call 212.935.5820.)