Things at the Doorstep 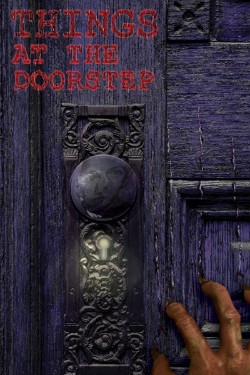 BOTTOM LINE: A clever pairing of solo shows inspired by one of the lesser-known horror fiction masters.

I tend to think of H.P. Lovecraft as somewhere along the lines of “Edgar Allan Poe, Part II.” Though diehard Lovecraft fans may take issue with such a simplification, it can be a helpful starting point for those who aren’t familiar. Still, while H.P. Lovecraft is not necessarily a household name, many fans of horror fiction insist that he is just as influential as Poe and Stephen King.

Lovecraft lived and wrote in the early 20th century, a time of radios and automobiles, but his stories generally have a Victorian sense of candlesticks and quills, a la Poe. His stories also tend to integrate supernatural phenomena with narrators who are rapidly losing their sanity, creating the double-edged sense of horror that, too, is also often associated with Poe.

Things at the Doorstep, the new double-bill show at the Manhattan Theatre Source, can work as a solid introduction to H.P. Lovecraft, or -- for those who already know and/or love him -- as a welcome ode. The show consists of two one-man performances, the first of which is a direct adaptation of Lovecraft’s short story “The Hound” (adapted and performed by Greg Oliver Bodine). The second, titled “I Am Providence,” is an original work written by Nat Cassidy that uses Lovecraft’s style and themes to tell a present day story. Taken together, the two plays make for a unique evening of theater that is entertaining, educational and strangely unsettling.

Things at the Doorstep is successful for so many reasons. Bodine’s performance as the narrator of “The Hound” is that of an expert in this kind of acting -- not a huge shocker when you see his list of credits, which includes several other solo shows that he also adapted from the works of Poe, Charles Dickens, Charlotte Perkins Gilman and others. This is Bodine’s thing and he is clearly in his element playing this suspenseful and maddened role. His savviness in the art of adaptation is just as apparent as his acting abilities: he manages to avert the common question in such confessional monologues (“Who is he supposed to be talking to?”) by incorporating a prop audio recording device into the set. Conveniently, this also preserves Lovecraft’s original intention that the narrator record his final moments in hopes that someone will find and believe his story.

“The Hound” would be enjoyable enough to watch on its own, although the outdated language is even more difficult to follow when spoken than in print (I read the story online before I saw the play, which helped my comprehension immensely). However, the true treat of the show is “I Am Providence.” Following the same confessional format, Cassidy’s play puts the Lovecraftian style and themes into modern language and context, and urges the audience toward a deeper understanding of who Lovecraft was and why he wrote the way he did. Both engaging and easily comprehended, “I am Providence” is a welcome counterpart to the dustier original story. Through clever writing and direction, it also manages to bring some Lovecraftian brand horror into the minds of the audience.

The tiny Manhattan Theatre Source space proves to be the perfect venue for such a show. It is hard to tell how creepy the theater is under other circumstances, but in this show it plays a role of its own, surrounding the audience with eerie sounds of scratching and howling and breaking down much of the barrier between the audience and the performer through its size and seating arrangement. After the performance, this intimacy translated to the lobby (complete with a cafe), where the audience mingled with the performers.

Any fan of H.P. Lovecraft’s works (or horror in general) shouldn’t miss this show and even seasoned Lovecraft fans will probably learn a thing or two about him. Fans of solo performances (or people who enjoyed or regret missing Geoffrey Rush in Diary of a Madman at BAM) are also well advised to attend. I happened to see Things at the Doorstep on the 74th anniversary of Lovecraft’s death (a fact which only added to the atmosphere of the show) but I can’t imagine it would be any less riveting on any other day.

(Things at the Doorstep plays at Manhattan Theatre Source, 177 MacDougal Street, through March 26, 2011. Performances are Mondays, Tuesdays, Fridays and Saturdays at 8PM, and Sunday, March 20th at 7PM. Tickets are $18 and can be purchased at theatresource.org or by calling 866.811.4111.)