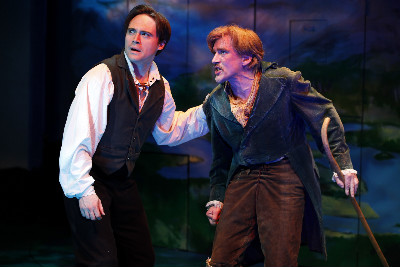 Kevin O'Donnell as Robert Ffolliott and Patrick Fitzgerald as Conn, the Shaughraun. Photo by Carol Rosegg.


BOTTOM LINE: One of Dion Boucicault’s “three Irish plays,” The Shaughraun is a melodramatic family-friendly romantic comedy set in the time of the Fenian Uprising in Ireland in 1866.

The Shaughraun, one of more than 150 plays written by Dion Boucicault over a century ago, is now being revived in a cheerful production at The Irish Repertory Theatre. Boucicault was a master of melodrama and The Shaughraun, like many of his other works, is a swashbuckling romantic tale of honor, bravery, love and betrayal. To be sure, the plot is formulaic and the characters are stereotypical. But the play still provides an afternoon or evening’s entertainment for the entire family, both because of the exceptional talents of the cast, and because swashbuckling, romantic comedy-dramas of this sort are just plain fun.

Here’s the recipe for the play. First, take three lovely Irish colleens, each enamoured of a different man. Arte O’Neal is in love with Irish patriot Robert Ffolliott, newly escaped from an Australian penal colony. Then there is Moya Dolan, in love with Conn, The Shaughraun, a fiddlin’, poaching vagabond and loyal friend to Robert. Finally, there is Robert's sister Claire, who is in love with Captain Harry Molineux, the British officer in charge of the unit sent to recapture Robert.

Now add in: a villainous Squireen, Conn’s doting mother, a traitorous scoundrel whose actions led to Robert’s conviction in the first place, and an honorable parish priest who is also Moya’s uncle. Season with assorted soldiers, policemen, henchmen, mourners and a dog. Combine boisterously and plump them all down in County Sligo in 1867. Add a keener’s wail and an Irish step dance to taste. Toss thoroughly, sit back, and watch what happens.

What happens, of course, is just what you’d expect; I don’t think it will spoil the play to tell you that, in the end, Robert is freed, the bad guys all get their come-uppances, and the young lovers are all appropriately matched up. And while this is all lots of fun, I was mildly disappointed. As Claire falls in love with the man seeking to capture her brother, and as he falls in love with her, there is the potential for an interesting conflict. But after setting all this up, Boucicault sweeps it under the rug. The potential for conflict goes unrealized, so no resolution is required; The Shaughraun ultimately turns out to be little more than a light-hearted romp. (Compare this to Arrah-na-Pogue, another of Boucicault's three Irish plays, yet one that is considerably more satisfying because it is more intricately structured).

But if The Shaughraun isn't perfect, this is by no means the fault of the cast , all of whom perform delightfully. Patrick Fitzgerald plays the title role (a role Boucicault himself played over a century ago), and is absolutely terrific. Also wonderful is Allison Jean White; as Claire Ffolliott, White succeeds in expressing a whole range of emotions not only in words but through the sinuous, balletic movements of her body. Now, don't go to The Shaughraun expecting complex, character-driven drama. But if you are up for a bit of fun, and want to take the kids to something that you will also enjoy, The Shaughraun is an excellent choice.

(The Shaughraun plays at The Irish Repertory Theatre, 132 West 22nd Street between Sixth and Seventh Avenues, through June 12, 2011. Performances are Wednesdays through Saturdays at 8 PM and Wednesdays, Saturdays and Sundays at 3 PM. Tickets are $55 and $65 and are available at www.irishrep.org or by calling 212.727.2737.)