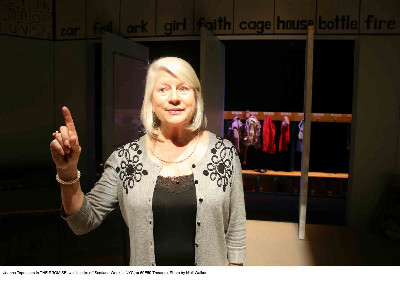 Joanna Tope in The Promise

In Douglas Maxwell’s gripping new play The Promise, the personal is political, the political is personal, and the result is almost unbearably dramatic. In a breathless 90 minutes, we are presented with the harrowing self-immolation of Maggie Brodie, a middle-aged teacher of 6-year olds. Maggie starts off deliciously imperious and caustic, but is brought low by her inner demons after a troubling incident at her school. Along the way Maxwell adroitly addresses Gordian-knot social issues such as the role of public education, the limits of multi-culturalism and religious tolerance, and the continuing victimization of women in a patriarchal world.

Maxwell’s tale flows briskly and brightly, with vivid action and telling detail. The school restroom smells of “bulk bought disinfectant and brittle paper towels.” Problem children are most likely to be those “who share their names with holiday destinations.” Maggie asks rhetorically—and astutely, “Does any terror in life compare to being new in a playground? Not many.”

Although The Promise takes place in London, it is palpably relevant to the current state of America’s embattled education system. Teachers, who are most often women, are admired but often abused. Maggie’s devotion to her students is pure to the point of obsession, as is her belief that education is based on a simple promise—that school is “where [children] will learn all they need to know…day by day, hour by hour, page by page.” Alas it is Maggie's faith in the sanctity of this promise that leads to the play’s violent climax and tragic denouement.

As written by Mr. Maxwell and acted by the electric Joanna Tope, Maggie is an indelible dramatic figure. She is a passionate narcissist whose self-image alternates between grandiosity (“My clothes are expensive, my jewelry sparkles and my shoes are impossible”) and pitilessness (“ [I am a] stupid old woman”). She is a drinker with a murky sexual past who is preternaturally attuned to power and status games among adults. It is only with children that Maggie can be fully human—empathetic and tender. Ms. Tope’s performance is wrenching and inevitable. As her entertaining acerbity gave way to helpless rage, I was drawn along in transfixed fascination. And though she looks a lot like Helen Mirren from certain angles, I can’t imagine anyone else in this role.

A lot of credit has to go to director Johnny McKnight who has perfectly calibrated the superb design elements to enhance and intensify Maxwell’s script and Tope’s performance. The classroom set by Lisa Sangster is ingenious; one tiny red chair speaks volumes, as do Maggie’s “impossible” red stiletto heels (Sangster also designed the costumes). The music by Karen Maciver and lighting by Dave Shea contribute subtly but profoundly to both the suspense and ultimate poignancy of the story.