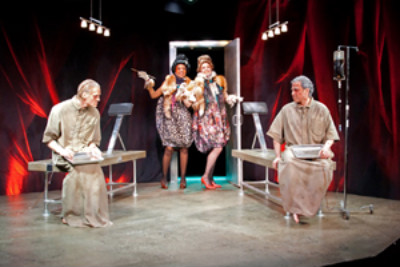 BOTTOM LINE: The Killing Room is not for the faint of heart, but if you have the stomach for the darker parts of man, treat yourself to this beautiful and visceral knife twist of a play.

American audiences are not likely to be familiar with playwright Daniel Keene, who is well established in Europe and also in his native Australia. But if his newest offering, The Killing Room, is indicative of anything, we should sit up and pay attention. Twin brothers Cy and Ed, ancient and decrepit, have presided over the end of civilization and now rule the remains of the universe from a stark honeycombed fortress/hospital. They are kept alive with blood transfusions, organ transplants, and the standard post-apocalyptic mush made from bits of humans. All that remain are their caretakers, a single chipper nurse and doctor with a leather fetish, and Somula and Vomula, the twins’ garish wives. These remnants of humanity, if you can call them that, are occasioned by the return of Cy and Ed’s long dead children, craving vengeance.

The Killing Room is inspired by the ancient Greek story of Atreus and Thyestes, twin brothers who committed fratricide and then waged a violent war with each other, stealing and re-stealing the throne of Olympia, spurring a blood feud that would last for generations. One Year Lease Theater Company commissioned Keene to write this play, and he has managed to capture the tone and energy of Greek drama in an accessibly modern piece. It is gutsy, bloody, horrifically depraved, and marches inexorably towards its necessarily violent end like a slowly moving train.

Mixed with humor, gravitas, and poetry, The Killing Room seemingly injects itself into the absurdist vein, but really shoots far beyond that. Instead of struggling with the inability to find meaning in the universe, it accepts this fate, and luxuriates in nihilistic repose. Why have Cy and Ed destroyed civilization? We do not know. Perhaps out of sheer enjoyment. How have they kept their husks alive, and how have their children returned from the dead? Chalk it up to mad science. Why do any of them continue to exist? Because they can. We just know it has been a very long time, and like a hellish Walter Matthau and Jack Lemmon, they are left to reenact an unending cycle of violence.

Cy and Ed, played by Christopher Baker and David Deblinger, have become pathetic, scrapping, and mewling children trapped in a room together, forced to live out the nightmare that hell is other people. They wake from tormented dreams, torture each other, and steal each other’s IV drips of blood. One could destroy the other if he really wanted, but the only worse hell is that of being alone. What saves this play from being painful to watch is the skill of the actors, who are all excellent, especially Baker and Deblinger, who revel in the dementia of vaudeville routines. Recognition should also go to Danielle Heaton and Richard Saudek for their deliciously creepy, riveting performances as the long dead children.

There is a bleak elegance to The Killing Room, lipstick traces of beauty that come out through the comedy or an old victrola playing rich, classical music. Cy and Ed muse about hearing a dog bark in the distance, or perhaps a bird song. Moments of this beauty appear in the visual elements as well. James Hunting’s set effortlessly hints at the roots of ancient Greek theater, achieving the sterile desolation of a bomb shelter while lavishing you with the opulence of gilt frames and red velvet, which when draped behind a black scrim achieves something of the cracks of hell. Jack Riggs shapes each scene with a powerful lighting design, in which a dim moody atmosphere contrasts with a bright clinical light, assaulting to the eyes, whenever the nurse is present. In a final moment of contemplation, the twins reach their faces into something like the last rays of a dying sun, wondering at the light.

The danger of dark plays is that, poorly done, they can send you home spinning into an existential crisis. Not so here. Thanks to strong writing by Keene and tight direction by Nick Flint, the audience is graced with the chance to stare into the abyss and contemplate not only the beauty of destruction, but also the greater, haunting beauty of the small moments of our lives. Keene's play at once condemns and accepts the “the absence of consequence and regret," the nascent seed of so much violence that grows in each of us. Without imposing meaning or morality, The Killing Room achieves a higher ground from which to watch the end of the earth, while evil, with nothing left to lay waste to, gnaws on the remains of its own carcass.

(The Killing Room plays at the Teatro Circulo, 64 East 4th Street, through April 2, 2011. Performances are Wednesday through Saturday at 8 PM. Tickets are $25, and are available by calling 866.811.4111 or online at www.theatermania.com. For more information check out oneyearlease.org.)