The Inexplicable Redemption of Agent G 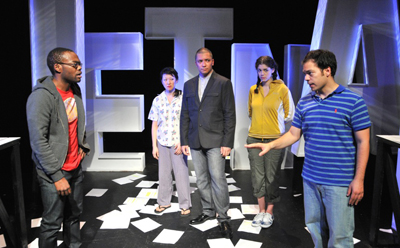 BOTTOM LINE: A hilarious whirlwind romp through every movie genre imaginable, intertwined with a surprisingly sweet tale of survival.

It’s only a matter of time before the Vampire Cowboys become a household name among the theatergoing community of New York. I'm not sure why I, myself, wasn't more familiar before checking out their current production, The Inexplicable Redemption of Agent G. I asked my theater companion for the evening, and she agreed that although she recognized the name, she had never seen their work. Our bewilderment lasted mere moments, until we got to our seats. Even before the performance began, the Vampire Cowboys promoted their brand with a large “VC” projected onto a screen for the duration of their preset. Excited applause from a good portion of the audience erupted as the lights went down: they knew the Vampire Cowboys brand; several times throughout the show, a character would state something along the lines of “that’s not very Vampire Cowboys of you, Playwright.” Even though this was only my first Vampire Cowboys experience to date, through some brilliant self-referential brand promotion, I’m pretty confident I know what they’re about and what can be expect from them in the future; even more important, I’m enthused about it. They not only pimp their brand shamelessly, the deliver the goods.

From the rhetoric of the program and dialogue of their play, the Vampire Cowboys appear to have a thing for non-traditional superheroes, fierce female leads, pop culture represented on the stage, and galvanizing combat scenes. They don’t explicitly mention the values of skilled acting, cohesive and inspiring design, or salient and witty playwriting, but if The Inexplicable Redemption of Agent G is in line with the rest of their work, one could confidently expect these elements from a Vampire Cowboys production.

Agent G is based on the true story of playwright Qui Nguyen’s cousin, who made a harrowing journey to the United States from Vietnam as a young boy. Director Robert Ross Parker cycles Agent G through numerous different styles that all mimic iconic film imagery. Parallel to the story about Nguyen’s cousin, a self-referential plot line that follows the struggle actually to tell a story is intertwined. The character of The Playwright is dragged on stage and held accountable for each plot twist, with characters often calling him out for his ineffectuality as he struggles to tell a story honestly. In the end, both story lines are successful. The vast majority of the show is played for laughs, and the audience happily concedes. The storyline about the struggling playwright is touching, if occasionally long-winded.

The cast of Agent G is given quite a challenge. The show slips between styles so frequently that less seasoned actors would likely drown in identity crises, but this capable cast, led by Paco Tolson and Bonnie Sherman, doesn’t miss a beat. The star of the evening is William Jackson Harper as The Playwright. Several times during the course of the show the script points out that Harper is an actor portraying playwright Qui Nguyen -- that Harper was in fact not the playwright himself and doesn’t even resemble him -- but despite this information being fed to me over and over again, I had a hard time remembering it. When Harper delivers his final tear-inducing monologue, he is so intimately connected to the material, it’s near impossible to believe that he isn’t telling his own story. I had to check my program after the show ended to make sure he really wasn’t the actual playwright.

Be forewarned that this style of comedy is not for the faint of heart or those who are easily offended. While Agent G may be of particular interest to comic book and superhero fans, anyone with a fondness for sharply-produced, unique theater should be highly entertained.

(The Inexplicable Redemption of Agent G plays at St. Mark's Church-in-the-Bowery, 131 East 10th Street, through April 16, 2011. Performances are Thursdays through Sundays at 8PM. Tickets are $18. To purchase tickets please visit incubatorarts.org or call TheaterMania at 212.352.3101.)