Lottery: two hours before each show, for $32 tickets

Standing room: $27, only when show is sold out

The Book of Mormon 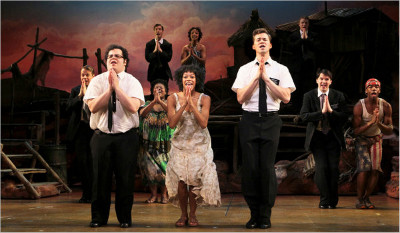 From left, Josh Gad, Nikki M. James and Andrew Rannells, with the cast of The Book of Mormon. Photo by Sara Krulwich.

BOTTOM LINE: The Book of Mormon is somehow both jaw-droppingly ill-mannered and adorably innocent, not to mention one of the best new musicals in recent memory.

Oh, hyperbole—you are so dangerous. The trouble with rave reviews is that sometimes, when folks finally get to see the show, their expectations are far higher than any show could possibly live up to. I want you to see The Book of Mormon, and I hope you enjoy it as much as I did. So I won’t say that it is The Best Musical Ever! (It isn’t). Or The Best Musical Comedy Since The Producers! (the epitome of overrated musicals). Or even The Best New Musical of the Season! (in many ways, The Scottsboro Boys was just as good, if a lot less fun). But it is easily the best new musical currently playing on Broadway.

If you’ve seen Trey Parker and Matt Stone’s South Park: Bigger, Longer, & Uncut, you will have some idea of the treats in store for you here. Like the 1999 movie, The Book of Mormon has a story line and lyrics that go far beyond the edge of “proper decorum.” I don’t want to overshadow the score’s truly excellent music. But if you blush at foul language, be warned. Oh my god, be warned. At times, The Book of Mormon makes the South Park movie look like The Sound of Music. Yet while The Book of Mormon is foul-mouthed, offensive, blasphemous, and incredibly rude, it is also one of the sweetest, most innocently hopeful musicals I have seen in a long time. And the fact that it manages to be both is a key factor in its success.

The story concerns two young Mormons who are sent to Uganda for their mission. Needless to say, Uganda is not their first choice—nor is the slobby, overweight, unsocialized Elder Cunningham (a terrifically annoying Josh Gad) the first choice partner for Elder Price (Andrew Rannells). Price, the golden boy of his missionary training center, has a deep-seated faith in his religion, and is horrified by Cunningham’s ignorance about Mormon theology. Normally, this “handsome leading man” role would be the show's least interesting character, but Rannells gives a subtle, layered performance. Outwardly, he is overly polite to everyone he meets, yet inwardly he is overly confident that he actually will save the world—all by himself.

As Nabalungi, the village girl who is the first to see the possibilities in what Price and Cunningham have to offer, Nikki M. James is freshly bright-eyed and eternally sweet. Her touching ballad about the magical land of Salt Lake City is one of the few times the show takes a break from its steady stream of more adult humor. She also plays a key role in what happens to the boys once they arrive in Uganda. And while it would be a shame to spoil them here, these adventures are capped off with “Joseph Smith American Moses,” clearly inspired by “The Small House of Uncle Thomas” from The King and I. Sung by the Ugandans with innocent, enthusiastic vigor, this is hands down the most shockingly crude story-song I have ever had the pleasure to witness. It also happens to be pure genius, and that is no exaggeration.

Given that The Book of Mormon is by Parker, Stone, and Robert Lopez (Avenue Q), it is not surprising that Uganda here embodies every single stereotype about Africa you have ever heard. Starvation, poverty, warlords, genital mutilation, AIDS—this village has it all. But The Book of Mormon is not blind to the troublesome ways in which “Africa” is often represented in Western culture (what I think of as the “fly on the eyelid” syndrome). Indeed, as a hilarious reference to The Lion King makes clear, its intent is actually to skewer these prejudices, well-intentioned as they often are. While this is often an extremely difficult line to walk, between “Hasa Diga Eebowai” (don’t worry, it gets translated) and Cunningham’s wonderfully self-centric “I Am Africa,” The Book of Mormon walks it brilliantly.

Now, one might expect The Book of Mormon to be an attack on Mormonism, especially given that church’s recent attacks on another segment of the population (i.e., the segment most commonly associated with musical theatre). But to the writers’ credit, The Book of Mormon is not an attack at all. Which is not to say Mormonism doesn’t take its fair share of knocks. The show starts off with some delightfully irreverent diorama-style Mormon storytelling (a nod to the all-too real Hill Cumorah Pageant). The team of missionaries are introduced with the song “Turn It Off”; led by their deliciously repressed head Elder (Rory O'Malley), the Mormons explain just how it is that they can keep smiling, no matter what happens. And then there is the theological masterpiece “I Believe,” in which we learn about some of the more interesting tenets of Mormonism.

Given all of this teasing, how can Parker and Stone call The Book of Mormon an “atheist love letter to religion”? Indeed, The Book of Mormon seems to be saying that all religion is in many ways completely ridiculous, often involving crazy stories that don’t make any sense, and that any logical person should well run screaming in the other direction. But The Book of Mormon also shows why people don’t—and how religion can be a source for good—because religion provides hope, light, and inspiration to countless people. For myself, I think the exact same things can be said about musical theatre, especially after seeing The Book of Mormon.

(The Book of Mormon plays at the Eugene O’Neill Theatre, 240 W 49th Street. Performances are Tuesdays through Thursdays at 7 PM, Fridays at 8 PM, Saturdays at 2 PM and 8 PM, and Sundays at 2 PM and 7 PM. The schedule changes slightly between May 30 and September 4: Wednesdays are at 2 PM and 7 PM, and Sundays are at 3 PM. Tickets are $69 - $142. There is a lottery two hours before each show; winners can purchase two $32 tickets in the front row and boxes. When the show is sold out, standing room is available at the box office for $27, cash only, 1 per person. To purchase tickets, visit telecharge.com or call 212.239.6200. For more information visit www.bookofmormonbroadway.com.)