Tickets are $10 and $5 for students and seniors.

The Bitter Poet: Looking For Love In All the Wrong Black Box Performance Spaces (Frigid Festival 2011)

Off Off Broadway, Muiscal/Solo Show
Runs through 3.6.10
UNDER St. Marks, 94 St. Marks Place 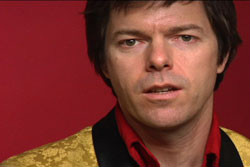 Kevin Draine, as The Bitter Poet.

BOTTOM LINE: The Bitter Poet laments his love life through irreverent poems and songs in this one-man performance.

Poor Bitter! He just can't find Ms. Right despite years of trying. But he sure has a knack for dating disasters, as is evidenced through songs and poems detailing such seemingly optimistic but inevitably devastating escapades. Kevin Draine, as the unlucky romantic, dons leather pants and a shiny gold smoking jacket as he rocks out on guitar. With a style that is sometimes reminiscent of a downtrodden Eddie Izzard and sometimes more manic Ed Helms, Draine does his best to create a unique character in Bitter, who comes off as a normal, albeit quirky, New Yorker. For my money, I'd prefer to see an even grander caricature with a more-developed persona. It's hard to go too far in red velvet boots.

Bitter tells the audience that this isn't one of those plays you'd expect to see in a theatre festival, and that it doesn't have a moral. True enough, although it's full of good advice. For example, don't start dating a 28-year old who's about to leave for a vacation in Nepal. When trying to woo a downtown performance artist, don't talk about your future house in a New Jersey suburb -- she probably won't be into that. Bitter expounds on topics ranging from his affinity for strippers (and the pheromones that accompany a lap dance), to the necessity of throwing out how-to books. One-liners such as "I first sang this to my therapist in 1998" pepper the performance in between songs.

The Bitter Poet is a great idea with ample opportunity to entertain, and Draine is an adept performer who uses appropriate amounts of self-deprecation and fourth-wall breaking to bring the audience into the stories. There are several laugh-out-loud moments. I'd love to see this character in all its hyperbolic glory -- I have a feeling it would be even more entertaining with bigger risks.

(The Bitter Poet: Looking For Love In All the Wrong Black Box Performance Spaces plays at Under St. Marks, 94 St. Marks Place between 1st Avenue and Avenue A, through March 6, 2011. Remaining performances are Saturday, March 5th at 4PM and Sunday, March 6th at 5:30PM. Tickets are $10, and $5 for students and and can be purchased at smarttix.com. For more festival information visit frigidnewyork.info.)