Teeth Of The Sons 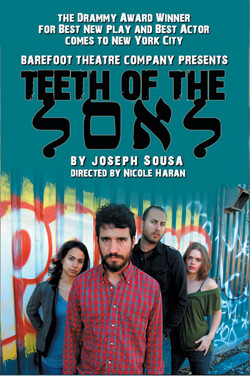 This is the kind of theater that I love and desperately search for -- a show in an intimate space with quality acting and an engaging story. The fact that the ticket is actually affordable makes Teeth of the Sons a rare gem. From the beautiful Cherry Lane Theatre, tucked in the West Village, to the detailed set, everything about this tight show was a joy. This is the kind of uniquely New York outing that I’d gladly bring my friends to.

Teeth of the Sons is about human emotion and religion. It isn’t a preachy play in any way and is actually very modern, dealing with contemporary life. The story centers around Jacob (Joseph Sousa, also the playwright) and his brother Sam (Will Allen). Jacob lives in modern day Brooklyn and has become an Orthodox Jew, taking on all of the practices that come with it, including dietary restrictions, observing the Sabbath, going to Temple regularly, and studying the Torah.

Sam reveals the less moral moments in Jacob's past, before his conversion. Sam wants Jacob to go back to his old life, and the play begins with a conversation between the brothers about this issue. Sam is a perfect foil to Jacob. Clearly the two love each, but there is strain in their relationship, particularly as it becomes apparent that Sam consistently gets himself into trouble and, despite being the older brother, has not grown up.

It turns out that Sam is actually in significant trouble: his girlfriend Maddy (Casandera M.J. Lollar) is pregnant and the couple has nowhere to go. Maddy’s Catholic family has kicked her out and Sam doesn’t want to stay with his father. Jacob agrees to take them in and right from the start the relationship between Maddy and Sam is clearly rocky. Lollar and Allen play the emotions, nerves and desperation of being a young scared couple perfectly. Sam continues to assure Maddy that he can provide for her and everything is going to be alright, yet Maddy has her own problems to deal with and the fact that Sam isn’t the most reliable guy becomes more and more clear. Maddy desperately wants to get out, but there is no where to go.

The highly emotional Sam and Maddy are a nice contrast to the disciplined, rule-driven Jacob. The apartment Jacob lives in (nicely designed by Josh Iacovelli) reflects a sense of order and history. Jacob himself is a very modern man and his character is very relatable, despite appearing devoutly religious; religion has just helped give him an order to his life, offering a more pure existence.

Atonement becomes an underlying theme. Sam keeps getting himself into trouble, Maddy is constantly furious at him and Jacob tries to maintain damage control as long as he can. The question becomes, how far can someone go before their behavior is unforgivable?  Every character in this play has sinned (some worse than others), but each deal with their sin in their own ways. The ability for these characters to forgiven themselves, forgive others and to be forgiven comes up again and again.

The story does not end in a way one might expect. Sousa takes a big risk with his ending, which is emotional and powerful. It offers much opportunity for self-reflection. Director Nicole Haran has done an excellent job with this production. She has managed to help the actors find distinct characters that become very much alive and never over the top.

Teeth of the Sons is very intelligent and never preachy. I loved learning about Jacob's conversion and others' reactions to this decision; this conflict makes for a captivating narrative. The script is layered, modern and classic, and the production itself is simply spectacular.

(Teeth Of The Sons plays at Cherry Lane Theatre, 38 Commerce Street, through May 14, 2011. Performances are Tuesdays through Fridays at 7PM, and Saturdays at 3PM. Tickets are $30 or $25 for students and seniors with I.D. and are available at telecharge.com or by calling 212.239.6200. For more information, visit www.barefoottheatrecompany.org.)