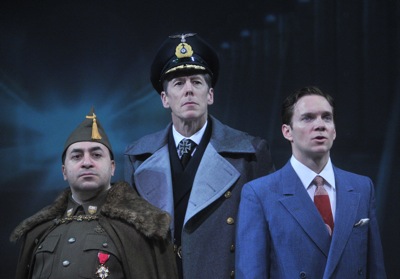 The world of theatre has so many varied offerings these days, and it can become difficult to draw lines between plays, performance art, and multimedia productions. But regardless of what you call it, all this boundary blurring creativity is great, exciting, challenging even, as Spy Garbo shows. Playwright Sheila Schwartz professes a “long career devoted to parallel research obsessions and graduate academic projects [that] connect film and propaganda.” Spy Garbo is the natural brainchild of such a career. I am hesitant to call it a play, although it succeeds at being a cracking good piece of theatre. If you can keep up with the dense exposition, it is beautiful to look at, engaging, and thought provoking. It contains daring and poetic language, and even delivers a few laughs. However, I never felt it in my gut, and the drama between the actors is little more than pretext for philosophical exploration into how film and propaganda shape history. The action is argument and only the idea of the stakes is high.

Francisco Franco, Wilhelm Canaris, and Kim Philby, played by Steven Rattazzi, Steven Hauck, and Chad Hoeppner respectively, are vying for the role of hero in each of their own stories, as well as to be the one to outshine Garbo, the super spy named for the famous actress. Most audience members will have heard of Generalissimo Franco. Canaris and Philby are more obscure historical figures. They were both double agents during World War II. All three, depending on which side of history you stand on, are worthy of praise or vilification. In Spy Garbo, they are stuck in History’s Limbo waiting both for vindication and for Garbo (the spy, not the actress). Together they reveal their shared histories, argue over interpretations of facts, and fight for their reputations before the omnipresent and judging History, which, as conceived by Schwartz, is more of a force than an idea.

Rattazzi plays the Spanish dictator as a buffoon, no longer relevant and desperate for the love of his people. Hauck plays Canaris, head of Hitler’s Military Intelligence and desirous of recognition for his attempt to assassinate Hitler, with sophisticated poise. Hoeppner’s Philby is a dashing, self-obsessed, drunken Englishman who defected to the Soviet Union and later wrote a best-seller, My Secret War, revealing his exploits to the world. The dialogue is an onslaught of crisp witticisms and convoluted historical treatises (the life of spies cannot be anything but convoluted). All three actors handle the script remarkably well with sharp performances.

History’s Limbo is alternately a cavernous library of the annals of time, an empty void, and a projection studio where classic film noir, news reels, and images of the past swirl together, threatening to destroy all distinctions. The 3LD Art & Technology Center is a fitting theatre for this setting. Its curving walls and sloping floors serve as a futuristic no man’s land in which the film is projected. Holographs appear in space and are used to brilliant effect so that the actors move not just in front of, but seemingly through, a field of images, interacting with the ghosts of their pasts.

The air of noir hangs heavy over Spy Garbo, along with the specter of Garbo himself, perhaps the greatest spy of them all. But after constant anticipation and name dropping, he never shows. As his story intertwines with those of the three defendants, it is revealed to be the most gripping. He is the self-made spy, “movie-perfect,” who “finishes clean.”

One of the final moments of the production sums up the action and substance of Spy Garbo beautifully. Surrounded by the dirty static of old film, Canaris waxes, “Here we are, we moderns. Proving eternally true Plato’s allegory of the cave. Crouched in the dark, our backs to the light. Transfixed by flickering shadows cast on a wall. Reels of essential fictions. Not accurate. But true.” Spy Garbo is a dramatic struggle between our love affair with film and the troubling ease with which we give ourselves over to its reshaping of truth, sometimes in dangerous ways. We can easily fall sway to Swift Boatings, Fox News, and Michael Moore, just as many Germans were victims to the talents of Joseph Goebbels. The real Garbo is film itself, a dangerous operative that spins truth and lies. It is beautiful, treacherous, and seductive. And we all so desperately want to believe.