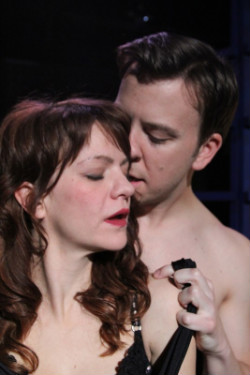 BOTTOM LINE: This highly engaging drama offers interweaving storylines that explore the struggles five characters face in coping with the past, and finding meaningful connections and sexual fulfillment. A compelling production that never has a dull moment.

Sometime in fifth grade my class embarked upon reading Sadako and the Thousand Paper Cranes, the story of a Japanese girl who develops cancer due to radiation exposure from the US bombing of Hiroshima. She makes a thousand paper cranes in the hopes of fulfilling her wish to live. Gifted playwright Kari Bentley Quinn used this story as inspiration for her new work Paper Cranes. Much like the primary school story, it merges drama and sentimentalism with enough grit to make it feel like a reflection of real life rather than over the top melodrama.

Paper Cranes centers around five lost individuals trying to find love, closure, and sexual fulfillment even with their baggage and less than perfect circumstances. Amy (Susan Louise O'Connor) sets her sights on engaging in anonymous sadomasochistic sexual encounters with men she meets online, hoping for a brief moment to transcend the pain and confusion of her existence. She eventually meets David (Eric T. Miller), who is hoping to find solace from the pain of recently losing his girlfriend in a brutal murder.

At the same time, Amy’s best friend and one time lover Julie (Melissa Hammans) begins to engage in a sexual relationship with the much younger Maddie (Sarah Lord) who is just discovering her burgeoning homosexuality while at the same time grappling with the recent loss of her father. Although Julie tries to approach her relationship with Maddie with wisdom and hesitation she eventually falls for the young girl. Her warm-hearted mother Mona (Cynthia Silver), the only character without a sex scene, tries to deal with the pain of losing her husband by folding numerous paper cranes which hang in strings from her ceiling. Only when she follows the familiar routine of folding the squares can she feel some sense of familiarity in her off-kilter world. When forced to come face to face with her daughter’s blossoming lesbianism, Mona is forced to realize it is time to move forward with her life.

Much like a Mary Gaitskill character, Amy seeks out affection in self damaging sexual situations. While leaning up against a bar room wall, she addresses the audience, explaining away her behavior as if giving her the chance to lose herself for at least a few moments. Her sexual submission seems an unusual contrast to her wise cracking personality out of the bedroom, offering up advice and wisdom to the doubtful Julie. We soon learn that David's fascination with her stems from her bearing an uncanny resemblence to his deceased girlfriend. David's hunger for sadism is never fully fleshed out, though he informs the audience that it initially stemmed from a need to escape the agony of dealing with his girlfriend's death. When we learn that his girlfriend died at the hands of a violent rapist, one wonders why he would desire to exert domination and violence over a woman who reminds him of the woman he lost. When he suddenly seems to be a slightly damaged Mr. Right for Mona, who he knows through a support group, his burst of kindness and normalcy seems unexpected. While the twists and turns of his character may not be easily comprehended, his actions nonetheless remain engrossing.

Director Scott Ebersold stages the script well, successfully managing to reveal two simultaneous sex scenes, unfolding like a two ring circus. The pivotal moments in the characters' storylines play out next to one another, enabling both for greater momentum and cohesion in a script that gives near equal stage time to each character. Bentley-Quinn tackles the plot's heavy handed issues with dialogue that almost never sounds unrealistic or overly sentimental. When a character delivers a line that might seem a bit too melodramatic, another character is quick to pull things back to reality. (When Julie gives Maddie the dramatic line "Never is a promise," Maddie replies by saying "Isn't that a Fiona Apple song?")
The use of lighting in the production is also highly effective, evoking the dimness of a dive bar one moment and the brightness of a Starbucks the next, making a somewhat minimal set feel like multiple locations. The play's talented cast of actors also contribute greatly to the success and compellingness of the production as each actor is able to seamlessly switch from the work's heavy drama to more comedic moments. Susan Louise O'Connor (Broadway's Blithe Spirit) gives a standout performance as Amy, showing aggressive strength that hides inner weakness and doubt.
Paper Cranes succeeds as an immensely engaging play, offering enough grit and realism to make its ventures into the dramatic and sentimental palatable. Downtown theater might sometimes be a gamble, but Paper Cranes is a gem you can count on. This is the sort of play that made you fall in love with independent theater in the first place.
(Paper Cranes plays at Access Theater, 380 Broadway, through May 8, 2011. Performances are Wednesdays through Saturdays at 8PM and Sundays at 3PM. Tickets are $18 and are available at www.ovationtix.com or by calling 212.352.3101.)