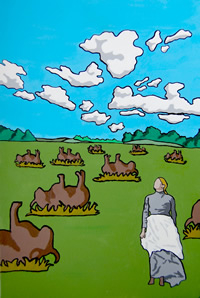 No. 11 Productions’ Oregon Trail is adapted from the classic video game of the same name, which is now celebrating its 40th anniversary by rolling out versions for the iPhone and Facebook. And now it has found its way to the Frigid Festival. If you are familiar with the game, you will be well rewarded for your patronage as the musical is sure to take you back to the dysenteric days of your youth.

Haley Greenstein steals the show as Hope, the self-sacrificing conscience of the wagon party, always willing to give up a piece of her clothing to help.

But the whole cast offers a high-energy performance and the enjoyable songs (jam-packed with inside jokes) are sure to leave you laughing.

Orphaned Hope and her brother Jebediah (John Bambery) have “picked up stakes” from Independence, Missouri in search of their Manifest Destiny.  The dramatic through-line, more than just the overcoming the perils of making it 2000 miles to Oregon, follows the siblings as they reveal the mystery behind the deaths of their parents.

A midi style soundtrack, paper mache oxen, and low budget set evoke the tinny music and blocky graphics of the 1980’s version of the game that many twenty and thirty-somethings will recognize.

Staying true to the game’s roots, this production is interactive.  The audience is responsible for making crucial decisions, such as should the party ford the river or float across? And the expected references are all there: snake bites, robbers, small pox and broken legs.

Alhough the Frigid Festival is now over, you are in luck because the Kraine Theater has picked up Oregon Trail for one more performance.  So ford that river, fight off small pox, and catch the final show before this cast dies of exhaustion.

(The Oregon Trail: Quest for the West! plays at the Kraine Theater, 85 East 4th Street, between 1st and 2nd Avenue. The remaining performance is Saturday, March 12, 2011 at 8:30PM. Tickets are $13 and can be attained by calling Smarttix at 212-868-4444 or online at www.FRIGIDnewyork.info. For more show information check out www.no11productions.com.)