Off Off Broadway, Dance Theatre
Runs through 4.23.11
Dixon Place, 161A Chrystie Street 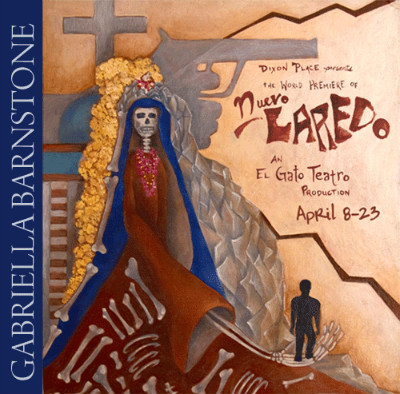 Two stories unfold in Nuevo Laredo, the new show from the El Gato Teatro dance theatre company. The first is a confession, given by “El Sicario” (David Hale) about his previous work as a hired killer (“El Sicario” is Spanish for “the hit man”). The other story is an abrasive and dangerous seduction between “El Chayo” (Carlton Cyrus Ward) and “La Santa Muerta” (Audrey Lane Ellis). Take note: “El Chayo” is the nickname for a real life Mexican drug lord who died in a gun battle in 2010 and “La Santa Muerta” is the female “Death Saint” who is traditionally worshipped in Mexico on the Day of the Dead.

The two narratives are twisted together and conveyed through a combination of speech, dance, and simple special effects. Take, for example, the opening scene in which El Sicario is sitting in a chair, visible through an archway, at a far corner of the stage. He draws an image of a graveyard in a notebook, which is projected onto a screen above the stage. He begins his confession, saying “You don’t know me” in Spanish. English subtitles appear on the screen. In this manner, he slowly works his way into his story.

Not fitting into any traditional concept of theatrical story-telling, Nuevo Laredo comes across as more of an abstract meditation on love, life, and death illustrated with performance. Many of the details that are usually important (setting, for example) are implied but not obvious (I believe El Sicario is in prison). This may leave some audience members, who prize a traditional form of story telling, perplexed or even dissatisfied. But the beauty of Nuevo Laredo lies in what it is able to accomplish, which wouldn’t be possible without sacrificing some of these default conventions. With equal weight given to words and to movement, the narrative favors a visceral appeal over a coherent story. This comes across strongly in a scene where El Sicario describes his methods of torturing, killing and sometimes (at the boss’s orders) resuscitating his victims. In this scene, Ward (wearing only a pair of briefs) appears as a sort of dummy for demonstration, passively receiving the actions that El Sicario is describing. The result is both a gorgeous dance between the two men and a visual illustration of El Sicario’s memories.

While the pace of the show is not always as riveting as that particular scene, and sometimes the actors’ movements are slow and repetitive in a way that, for me, didn’t make a lot of sense, I found the overall experience evocative, worthwhile--and short. Clocking in at about 50 minutes, I was surprised when the show ended. I wasn’t alone in this--the applause was tentative at first, then fuller when the cast came out and bowed.

Nuevo Laredo is the latest offering from El Gato Teatro, a company headed by Gabriella Barnstone that blends dance and theater using innovative methods. Scanning the playbill, it is clear that Nuevo Laredo is born out of the collaboration of a group of artists with diverse talents: Barnstone, who also co-wrote and directs this show, has choreographed for the Macy’s Holiday Spectacular; Nicholas Colvin, the sound designer, performs with a a classical Javanese ensemble; Carlton Cyrus Ward, one of three in the cast, is also a circus performer; Kati Vaughn is the show’s official Tattoo Artist. I am guessing that this is what Barnstone has in mind for her company: putting together creative, out-of-the-box minds is likely to lead to creative, out-of-the-box theatre--and Nuevo Laredo certainly fits that description. Each artist’s contribution is like a simple token of beauty, none of which detract from the overall appeal of the show.

The other star of the show is the venue. The two-year old performance space at Dixon Place is simple and clean and manages to be at once intimate and spacious. If you decide to see this strange gem of a show, I’d recommend arriving early and having a drink at Dixon Place’s house bar, which is charming and comfortable and subtly recalls the Old West. This is a good fit for a show like Nuevo Laredo and, to set the mood, they’ve hired a live Mariachi band to play each night before the show.

(Nuevo Laredo plays at Dixon Place, 161A Chrystie Street, through April 23, 2011. Performances are Fridays and Saturdays at 9:30PM. Tickets are $15 advanced or $18 at the door and may be purchased by visiting dixonplace.org or by calling 866.811.4111. For more information visit elgatoteatro.com.)