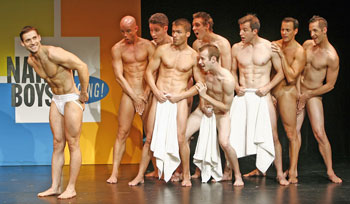 BOTTOM LINE: This once radical gay show has transformed into a friendly, off Broadway commercial staple aimed at straight women.

The first question that comes to my mind when I hear that Naked Boys Singing! has been running off Broadway for nearly 12 years straight is “How?” or, more specifically, “Is the novelty of men naked on stage that appealing to that many people?” After seeing the show, though, the answer is clear: Naked Boys Singing! has evolved from a fringy gay show into a commercial staple of off Broadway and the main way they have accomplished this is by changing the target audience.

Walking into the theater, it is immediately clear how far Naked Boys Singing! has come from its origins at the historic Actors Playhouse in Greenwich Village, a couple of blocks from the Stonewall Inn (often considered ground zero for America’s gay rights movement). For those who have never been, New World Stages is off Broadway’s answer to the “multiplex” cinemas that are an integral part of today’s mega-malls. The night I attended, Naked Boys Singing! was playing on “Stage 2,” across the way from Avenue Q and a few doors down from a children’s musical titled Freckleface Strawberry.

Aside from the almost constant male nudity (the shock of which wore off for me about halfway through the second song), the show feels rather watered down, and cheaply produced considering the rather hefty $69.50 ticket price. The score is thinly delivered via a single keyboardist, except for the song “Muscle Addiction” which uses a pre-recorded dance beat, the volume of which had to be adjusted multiple times in order to not drown out the voices of the un-miked performers. There is no set to speak of, the only stage effect is a twice-used fog machine, and the few costumes consist of polo shirts, khaki pants and sportswear. The New World Stages’ shopping mall vibe is kept alive through the whole performance by a rather annoying pair of flatscreen televisions that display the title of the show (and, to an astute observer, make transparent the multi-use intention of the theater).

The key to the success of Naked Boys Singing! in 2011 is that it relies heavily on bachelorette parties, a demographic that it is hard to imagine attending the original production. The show includes a segment with audience interaction that assumes that there will be at least a few brides-to-be at each performance and, the night I attended, there were about five. Based on the almost constant laughter and gleeful shrieks at the sight of the performers shaking their penises, I suspect that this part of the audience was having a great time. I also suspect that gay tourists may find the show worthwhile for its novelty alone -- you certainly don’t get to see a nude male musical review in Anytown USA. However, my companion and I -- both gay men who live in New York City -- felt out of place. The same audience the show was originally intended for is probably the least likely to enjoy what it is today.

To its credit, the show does spend time dealing with the issues that gay people deal with. “Fight the Urge” is about the difficulty young gay men face while trying to hide their attraction in the locker room, and the two-parter “Window to Window” portrays two lonely neighbors longing for each other from afar. However, the song I most anticipated after reading the reviews from 1999 never happened; “Kris, Look What You’ve Missed” was a reverse strip that portrayed a gay man lamenting the loss of his partner to AIDS as he went through his morning routine of getting dressed. The producers have probably cut this number in order to keep the mood light, probably to avoid bringing down the women in the audience who are having their last big night out before they begin their married lives. The irony to me, though, is kind of painful: in 2011, it is cool to be gay-friendly, but contemplating the tougher gay issues could be enough to ruin your night, so let’s just avoid the subject altogether.