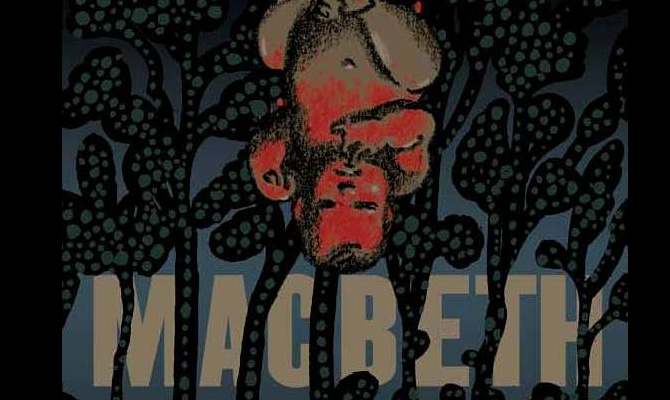 BOTTOM LINE: Theatre for a New Audience’s latest offering is a very good looking production that gets the job done but plays it too safe.

Macbeth! Macbeth! Wherefore art thou Macbeth! Why hast thou failed me once again? Why hast thy raw, pulsating, horrifying power failed to spear me in the heart? Why do thy actors contain rather than unleash thy dark glories! Why hast thou not thrilled and chilled me mightily? Why, O why, must I sit for three long hours in the dark only to feel that thy mysteries have not been revealed in a new light, but only rehashed prettily, yay, prettily, most verily, but also most boringly?

I’ll stop with the faux-Elizabethan vernacular, but sometimes only a satirical mis-use of tragedian verse can express one's point: particularly the deep frustration of experiencing yet another production of one of Shakespeare’s most popular plays that lacks a clear point of view on the text. Beyond a director’s understandable desire to stage the play, and an actor’s understandable desire to be in the play, there has got to be a good reason to offer the play to an audience -- again -- a point of view, something to grapple with, something to say. This production is competent, clean, nicely done, color-blind in its casting and masculine in its witches (which is cool)...but...well, it isn’t anything else particularly.

This is most certainly a deliberate choice in its own right to explore the subtle possibilites within the text, but it just doesn't feel right. There is so much to do with this masterpiece, so much to explore, to explode; it is incredibly topical right now, and that is exciting. Dictatorships are toppling, or failing to topple in the case of Libya -- this is a great moment to investigate the inner workings of a tyrant’s mind -- and that of his partner in crime. Who is married to these dictators? How does that relationship work? Why are these people able to maintain power for so long? Why do they need power? One can argue that the text examines these questions without the help of directors and actors, but this production proves otherwise. What it gained in gorgeous costumes, lighting and sets, it lost in need, drive, desire and fuel. Watching this show is like looking at a Maserati on the showroom floor rather than driving one at top-speed along a winding coastal road and feeling the danger of careening over the cliff at any moment. I don’t want to look at a pretty object; I want to go for a ride.

John Douglas Thompson as Macbeth and Annika Boras as Lady Macbeth are both attractive actors, who move and speak well (Thompson won an OBIE Award for his portrayal of Othello in TFANA's 2009 production, also directed by Arbus). They seem like pretty nice people, and therein lies the problem. As portrayed here, Macbeth and his Lady seem as likely to go on a joint murderous rampage and unceasing quest for power as my Grandma June (whose unceasing quest is for strawberry ice cream and historical novels). Boras’ treatment of the infamous ‘Out damn spot!’ scene is moving and truly sad, but it feels out of context.

American productions of Shakespeare’s plays, this one included, tend to emphasize the poetry of the language but take a naturalistic approach to physicality, while the opposite should be true: treat the language more naturalistically, make it sound like speech rather than literature, and heighten the physicality. Help the audience undestand and make the text more accessible through cadence, phrasing and intonation -- but also do it justice, embody its intensity and power. Too often the electricity of Shakespeare’s work is unmanifested, as if the juice from an entire power plant is being used to light one thirty watt light bulb. Light up a whole city, or make some explosions happen! Macbeth, more than any other of Shakespeare’s plays, has the potential to feel like a roller coaster or a rock concert. This particular production is more like a dinner party where you hear the hosts fighting in the kitchen.

The production design is really quite lovely, with lighting by Marcus Doshi, set design by Julian Crouch, and costumes by Anita Yavich which are truly beautiful. A wonderful play to look at, this Macbeth is a fine presentation, but not nearly as dynamic as it could be.