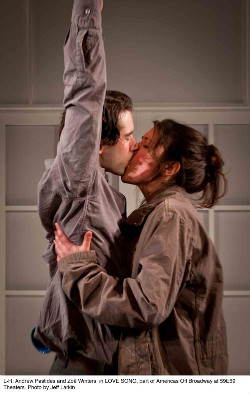 Oftentimes, when one acquires a new sexual interest they are overcome with an emotional high, one that fades as reality sets in and they realize that perhaps they are not actually in love. For Beane, the main character of Love Song, produced by Don't Eat the Pictures and Wellfleet Harbor Actos Theater, this emotional high proves to be life changing for both for Beane and those around him. While the realness of his love is questionable, it proves to be greatly beneficial in the end.

The play opens with Beane (Andrew Pastides) sitting morosely in his spartan apartment. His depression and listlessness are communicated through a lamp that slips out of Beane's grasp, rising too high for him to get the light that he needs. Later his despair is shown further when the walls of his apartment literally begin to close in on him. These two clever tricks communicate effectively Beane's troubled state of mind.

When he flees to his sister Joan's (Laura Latreille) apartment, we see that her life is also in disarray. After spending years focusing on her career, she has become a tightly wound workaholic with a cold heart. She fires interns for crying and belittles her husband Harry (Ian Barford). In order to calm down at the end of the day she requires glasses of white wine, filled to the brim.

When Beane returns to the darkness of his apartment he is surprised by an intruder, a seemingly unhinged, albeit cute, burglar by the name of Molly (energetically portrayed by Zoe Winters). Despite having no visible weapon or being anywhere near an imposing size, she robs Beane of what little possessions he has and convinces him to fork over his wallet. She asks Beane increduously how a person could manage to have accumulated so few items in their lifetime, opening his eyes to the bleak state of his life. When Beane later meets his sister for lunch his is strangely euphoric, bursting with joy and optimisim. He pontificates on the new-found joy he sees the world. Beane's sudden joie de vivre becomes contagious, causing his sister and her husband to reignite the passion between them that has long laid dormant.
Much of the play's infectious appeal can be credited to a perfectly cast ensemble. Every actor is perfectly suited in their role, fully embodying their characters. Andrew Pastides in particular shines as Beane, as he is able to seamlessly convey the dramatic turns his character goes through as he turns from morose to euphoric. Kolvenbach's script fleshes out a simple plot with warm humor and well developed characters. It's not a surprise that this American play has been so well-received, both here in the states and abroad, even earning a British Olivier Award nomination in 2007.
What initially seems to a quirky love story turns out to raise much larger questions about how the crutch of delusion can be an effective means for escaping the paralyzing effects of modern maladies of anxiety, depression, and stress.