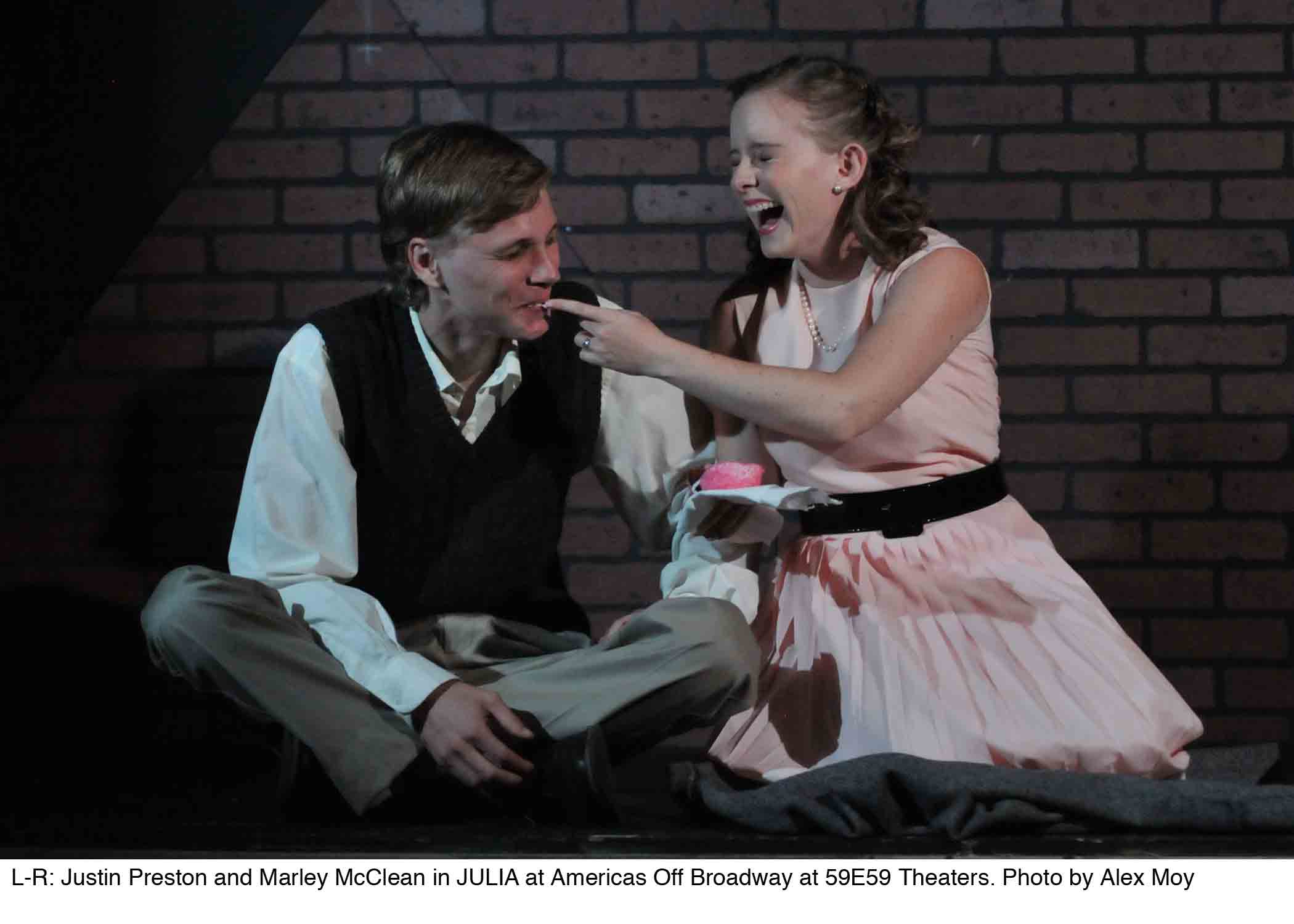 BOTTOM LINE: Likable characters, a gifted cast and an intricate set partly make up for a story that never feels fully resolved or fleshed out.

There are mistakes we make in life that haunt us; situations we relive again and again as we imagine what we would have done differently. If we can't find a way to correct our errors we are stuck living with the damage done. This is the case for Lou Perino (Richard Fancy) in Pacific Resident Theatre's production of Julia. Lou is a man who has spent fifty years haunted by one terrible night at the tender age of 18, in which a fit of anger and frustration led him to mistreat his best friend Julia (Marley McClean), with whom he was secretly in love. When young Lou (Justin Preston) tells Julia he is being deployed to Korea the next day, all of his long hidden emotions come slipping out, but instead of a heartfelt confession they wind up manifesting in anger and jealousy. After the war, Lou leaves town, without returning to make reparations with Julia.

Fifty years later, Lou hears that the department store where the two worked is being demolished, and returns to their hometown to track down his long lost love and make amends for his behavior. Lou chances upon Julia's troubled son Steve, who runs an illegal gambling business from his coffee shop, spending his days chewing tobacco and fielding bets. Lou also crosses paths with wisecracking Frank, a former coworker from the department store, who sympathizes with Lou despite knowing how upset he made Julia.

Lou eventually discovers that his beloved Julia has gone senile, and her son has sent her to a nursing home. He begs Steve to take him to see Julia, a proposition Steve is slow to agree to as he knows how Lou's actions marred his mother. When Lou finally sees Julia again, reconciliation is not as easy as he thought it would be.

The play's simple story is somewhat augmented by a gifted cast and an intricate, versatile set: the coffee shop for the modern day scenes transitions seamlessly into a 1950s rooftop. Veteran actor Richard Fancy embodies the role of crotchety Lou so completely that he is almost unidentifiable despite being a well known face on both stage and screen. Roses Prichard is convincing as an elderly woman confused by her disintegrating mind, trying to hold on to what threads of reality she can still grasp. Haskell Vaughn Anderson III is charming as Frank, showing a knack for comedic delivery. Unfortunately, his enigmatic character is not pivotal to the plot.

Julia succeeds in finding humor and sentiment in lost chances and sad circumstances, but the story and characters could be better fleshed out. Playwright Vince Melocchi writes some humorous dialogue, and he succeeds in creating likable characters who are capable of pulling in the audience. But he doesn't let their stories play out as much as he could; he probably could have granted his characters a bit more closure. If only Julia had a third act, it might prove to be a more satisfying work.