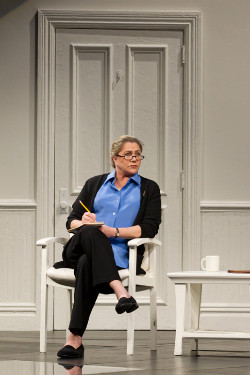 BOTTOM LINE: A poorly conceived Broadway show with a bad prognosis and a big star.

You’re going to have to scramble if you want to see Kathleen Turner in High on Broadway. The show is closing on Sunday, less than one week after its opening performance. And really, it’s the opportunity to see Ms. Turner’s assured stage acting that saves this sinking ship from being a total waste of your time and money.

Turner plays Sister Jamison Connelly, a foul-mouthed nun who agrees to sponsor Cody Randall (Evan Jonigkeit), a 19-year old with a drug problem. Our pleasantly un-nunnish nun of a protagonist is at first (and repeatedly throughout) hesitant to work with Cody, but is convinced (and re-convinced) that she is the right person for the job by Father Michael Delpapp (Stephen Kunken). Over the course of the show, Father Delpapp unloads an arsenal of reasons why Sister Connelly is the right person for the job, ranging from her own past as a drug addict, to its necessity for her spiritual journey, to his personal stake in Cody’s recovery (who, it is revealed, is Father Delpapp’s nephew).

The scenes mechanically rotate through Turner’s monologues, followed by meetings between Sister Connelly and Father Delpapp, followed by therapy sessions between Sister Connelly and Cody. Lather, rinse, repeat -- this circular structure feels more imposed on the show than an organic rhythm and, for much of the show, nothing really revelatory happens to push the story forward. This stiltedness is a symptom of the show’s (now terminal) disease. The problem is not that the concept cannot work, but that the characters and lines aren't dynamic or enthralling enough. The script is so full of cliches and “I feel like I’ve seen this before” moments that it was stale before the performers even got their hands on it.

Exhibit one: Cody’s first answer to almost all of Sister Jamison’s probing questions about his past is “I don’t know” (the constant repetition of this line would feel like a joke if the questions weren’t about the rape and drug use of a child). His obstinacy is too consistent to be entertaining -- and too consistently followed by him relenting with an answer (which is usually just what you expect it to be if you are good at imagining worst-case scenarios). Exhibit two: when we see Cody try to shoot heroin in an alley, he fails to find a suitable vein on his arm and resorts to injecting into his foot -- a decision that speaks more to a heavy reliance on portrayals of drug addicts in movies or TV shows (that most of us have already seen) than on creating a scene that is uniquely Cody’s. Even the show’s dramatic final line rings with predictability.

I’m the type of theatregoer who can still enjoy a lackluster show if I get to see a performer I love (Christopher Walken and Sam Rockwell in A Behanding in Spokane, for example). During High, the closest I got to the religious experience of theatre occurred while watching Ms. Turner transform what would be a flat character with unoriginal lines into something more. As Sister Connelly, she smacks her lips between sarcastic lines, postures her body with mannish intimidation and yelps with self-disgust the few times she loses control, all with enough energy to fill the 766-seat theater.

If there’s anything to critique about her performance it is that it offsets the balance between her and the other actors. Jonigkeit and Kunken, the other two-thirds of the cast, can’t quite work the same brand of show-transforming magic (nor should they be expected to). Jonigkeit is particularly challenged to make sense out of Cody, whose vast range of behaviors and emotions come across more as the inability to mold Cody into a coherent character than as the real erratic behavior of a drug addict. Kunken is appealing enough as Father Delpapp, but the mild-mannered and funny priest doesn't have enough lightning in him to be memorable.

If you’re a fan of Kathleen Turner, you may want to bolt to TKTS and see if you can get discount tickets for one of the few remaining performances. Even in a poorly conceived show that is about to close early, she doesn’t disappoint. Did she even get the memo?