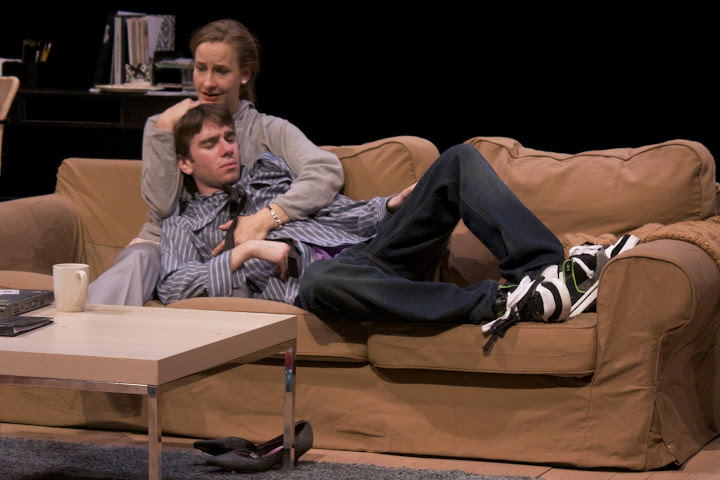 BOTTOM LINE: A sister and her bipolar brother duke out the morals and merits of genetic testing prior to her in vitro fertilization.

What is natural about conception in the diagnose-and-prescribe crazed society of today?  And what does natural conception mean at this point when screening is done to declare and prevent all possible surprises? The Red Fern Theatre Company's world premiere production of Dorothy Fortenberry's Good Egg is bringing up these questions and more.


The play focuses on thirty-something, personable and mothering Meg, who desperately wants a child, despite the fact that she is neither married nor is she in a relationship. Aside from the unfairly uneven relationship she has with her bipolar, dependant brother, Matt, of course. At the top of the show, Meg discusses her gynecological issues with the audience, exclaiming that she's been diagnosed with endometriosis and that now is the time she must have a baby if she's to have one.  Switching back into her fourth-walled reality, Meg then has the heady task of explaining the situation to Matt. Though he eventually agrees to support Meg's decision to rear a child using a sperm donor she's found online, Fortenberry compellingly makes Matt the voice of reason at this point, calling into question what Meg knows about this sperm donor and why she doesn't simply have a baby the "normal" way. But, partner-less and with a womb that's use is dwindling, Meg has no choice and continues with the process.  Meg describes with zeal taking hormones to make ready her eggs for harvesting, delving into an amusing extended metaphor comparing farming and fertilization.


And now the didactic part of the play unfolds. Matt, who has heretofore been well behaved, begins to slowly but surely mentally destabilize at the thought that Meg is going to have those harvested eggs tested for hereditary diseases, including bipolar disorder. Seeing this as a clear judgment about him and his worth, Matt is overwhelmed by the idea that Meg wishes he was anything but as he is. An argument rages between the siblings for what at times feels as long as the hours that are being portrayed on the stage.  Matt becomes more and more manic, careening between elated and terrifying. Sadly by the end, Meg is unable to cope with Matt after he has ceased taking medication, and with an ultimate unruly act, Matt leaves Meg with little other choice than to make certain her child will be free of such a disorder.


Though undoubtedly (and unknowingly) reiterating the necessity for Meg to screen for potential disease, Matt does articulate a number of well-constructed arguments. Specifically, Matt calls into question the incessant quest for perfection that procreation has become at this point. He valiantly protests against the true enough GATTACA-like trends that consume the present state of procreative affairs in first world countries. Does checking for genetic disorders really fall under the category of simply wanting what's best for the future of our contribution to the population? Strangely incorporated, as well, Matt repeatedly refers to Meg's harvested eggs as babies and she vehemently corrects him over and over again, explaining that they are just cells at this stage and absolutely nothing else. The necessity for this bit of pro-life/pro-choice mention is unclear and adds little to the argument on either side.  Perhaps when expounding on the virtues of screening the genetics of cultured eggs prior to in vitro, it is best to leave the pro-life/pro-choice debate aside, as it only serves to muddle the issues.


Good Egg, however, is quite effective in laying out the moral dilemma involved in choosing whether or not to screen for hereditary disorders and diseases, as well as believably presenting a bipolar character who has a chance to describe the internal processes of the brain during high and low points. Though the characters end up more as figure heads for their respective sides through most of the second half, the acting is effective and the science-driven arguments are refreshingly poignant concerning issues that have become socially standardized. Sci-fi no longer, genetic screenings for the recently impregnated are now simply par for the prenatal course.


Kel Haney's direction is clean and clear, much like Scott Dougan's tidy set. Colin Wambsgans' musical composition is charming and interesting. Andrea Day and Dan McCabe as the starring actors in this two-hander do justice to the script and their representative ideologies, and cannot be blamed when the back and forth becomes a bit tedious by the end. In Matt, McCabe simultaneously has the more difficult and more rewarding role. Particularly captivating is Matt's monologue about his disorder, to which McCabe brings impressive physicality and zeal.


Part of the mission behind The Red Fern Theatre Company is to evoke awareness to social issues through theatre and pair productions with philanthropic organizations that aid the same causes, donating a percentage of ticket proceeds to those organizations. Good Egg is paired with The Family Center for Bipolar Disorder (http://bpfamily.org/home).