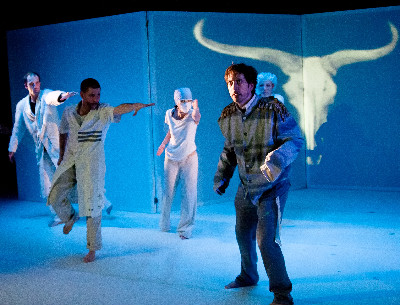 BOTTOM LINE: A bizarre, disorienting work with a complex, hard to follow storyline that alienates the audience but succeeds in ruminating on how technology isolates us sexually.

Epona's Labyrinth, a co-production between South Wing Theatre Company and the Japanese art collective Nibroll, returns to the theater's familiar multimedia terrain, in which productions frequently examine the effect technology has on the way we perceive and connect with others. Epona's Labyrinth goes further, however, showing technology and corporate mindsets as corrupting influences on human sexuality. Press materials for the production describe the work as "a surrealist psycho-sexual drama," which puts it lightly, as the plot is so twisting, dizzying, and absurdist, that audience members may have trouble following the many bizarre events that unfold for those unfortunate enough to reside within the walls of the play's mysterious hospital.

The work opens with a character simply known as Husband (Andrew Shulman), who is frantically trying to find his wife who was taken by a mysterious green ambulance in the middle of the night. A cloaked woman (Davina Cohen) informs Husband that her daughter has been taken by the green ambulance as well, and that she believes it to be a conspiracy. She obtains for him a code to grant him entry to the foreboding hospital where his wife may or may not be.

However, once inside the hospital, Husband cannot locate his wife and manages to convince security to allow him to watch hours of surveillance video in the hopes of catching a glimpse of her. Eventually he realizes that the hours of footage from the hospital's innumerable security cameras would take months to view and he abandons the project, and seemingly also the idea of finding his wife. While inside the hospital, Husband soon learns that bizarre sexual afflictions affect many of the residents and staff, and that the head doctor's (Nathan Guisinger) main interest is conducting his own sexual experiments. Husband runs into the hospital's lawyer (Benjamin Stuber), a man who is afflicted with a strange sexual disorder that entails him acheiving orgasm through the stimulation of noise. When lawyer falls into a coma and eventually dies, the doctor plots to surgically replace the lawyer's "member" as his own, so that he might benefit from his affliction.

The characters in the play find sexual gratification not from connecting with others, but instead through aural and visual stimulation. Multiple scenes show characters and/or on-screen silhouettes masturbating to the stimulation of sounds as well as the idea of being watched. The hospital's extensive surveillance system also offers commentary on the voyeurism created by such technologies. A cold, artificial-seeming nurse, (Sophia Remolde) who was gestated in a cow's uterus, flips through photos of differing cuts of beef, asking Husband which variety he finds most sexually arousing. A young girl (Ximena Garnica) masturbates in front of a security camera, hoping the pedophilic doctor might see her and find her to be cute. Eventually, Husband sets his sights on rescuing the girl from the hospital, as finding any trace of his wife seems to be a lost cause.

The play's multimedia screen also serves to offer a visualization of the characters' own senses of sexuality. In one memorable scene, animated penises dance across the screen while a young girl (Kate Villanova) hits them with a broom while sounds from the Mario Brothers video game accompany her swats.

The play's bizarre plot and sexual material seemed to make the audience uncomfortable, with some audience members sneaking out in the middle of the performance. As the plot unfolded further, there was scattered laughter amongst audience members, who turned to look at those seated nearby as if to ask, "This is supposed to a comedy, right?" Argentinian playwright Ivana Cantanese has said that making the audience uncomfortable was part of her desired intention, as she wished to show how an individual can be exploited by a large institution. Director Kameron Steele (who co-wrote the piece with Steele) skillfully manages to stage the confusing work, successfully integrating both the ever-changing mix of characters as well as the ever-changing multimedia displays.

The cast tackles the difficult task of making the material and characters believable, with Sophia Remolde soliciting laughter as the robotic, socially inept nurse and Kate Villanova convincingly portraying an adolescent patient, who flips back and forth between insanity to sanity.

While Epona's Labyrinth is visually captivating, both through the austere whiteness of the hospital setting and the use of multimedia, its strange and  complex plot is not easily digestible, and it may alienate some audience members. Regardless of one's opinion of the work, it is undoubtedly evocative, with a disorienting effect that lingers long after one has left the theater.

(Epona's Labyrinth plays at HERE, 145 Sixth Avenue, through April 23, 2011. Remaining performances are Tuesdays through Fridays at 8:30PM, and Saturdays at 4PM and 8:30PM. An additional performance is Monday, April 18th at 8:30PM, and there is no evening performance Saturday, April 23rd. Tickets are $18 and can be purchased at theatermania.org or here.org, or by calling 212.352.3101.)