Bring Us The Head Of Your Daughter

Written and Directed by Derek Ahonen 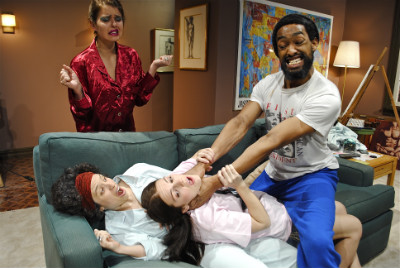 The cast of Bring Us The Head Of Your Daughter. Photo by Larry Cobra

A white carpet slightly beaming in the house lights, adorning the set on which it’s laid with an almost eager sense of expectation and tension, almost always signals high drama to come. Tapping into the human instinct to avoid messes and blame, such carpets generally suggest that this home on display (in this instance a naturalistic set by Alfred Schatz) is not going to be a place the audience will want to come home to themselves. That gut feeling doesn’t steer wrong in The Amoralists’ production of Bring Us The Head Of Your Daughter, written and directed by company member, Derek Ahonen.

Lesbian couple Jackie and Contessa call this white-carpeted, Gramercy Park apartment home. They have recently found out, along with the rest of the news-watching population of America, that their beloved daughter Garance has been on a cannibalistic spree through the Great Plains, specifically targeting soccer moms. As society and the moms themselves question how on earth their parenting could have gone so wrong, an ever-widening rift develops between the women via their respective ways of handling the situation. Jackie raucously attempts to numb herself with various legal substances as Contessa stoically applies a brave face, their methods already inextricably separating them prior to two subsequent visitors to the apartment, who make permanent the chasm between them.

True to the mission statement (and name) of The Amoralists, Ahonen’s play is attempting to present morally questionable material, or rather material that is trying to explore society’s moral code, in a diplomatic, non-judgemental way. And though this mission is praise-worthy in and of itself, Bring Us The Head… misses the mark. The play ends up presenting a cavalcade of taboos that simply don’t ring true within the New York setting of the play. Contessa becomes the de facto voice of reality while the other characters orbit around her as larger than life clowns, each representing their own charicature of a cliché theme that have only fleeting moments of engagement with each other and with Contessa. From early on in the action, it becomes unclear whether the material is meant to mock or elicit genuine emotion due to this gamut of character portrayals. Perhaps too close to the work, Ahonen’s indulgent direction of his own material allows these characters the freedom to act as issues on parade without coming off their floats to meaningfully interact.

During one of the few instances of calm, as spectacle and confetti having momentarily subsided, a character makes an interesting assertion: forgiveness is easier than punishment. Once all the taboo detritus is cleared, this is the question that sticks out as a stone left unturned, the tiny parcel for the audience to mull over. In a country chomping at the bit to prove worth with might, is passivity ever an adequate answer or will only an eye for an eye do? Ahonen has here tapped into the beginning of an interesting quandary, but with so much static around it in this production, it is likely to be overlooked.