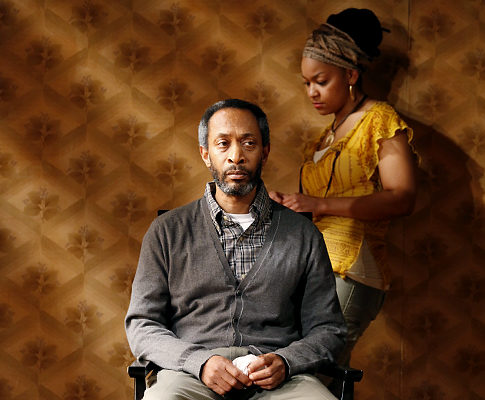 Michael Rogers and Crystal A. Dickinson in Born Bad. Photo by Carol Rosegg.

BOTTOM LINE: A powerful take on a taboo subject that requires a fair bit of theatrical adventurousness.

“I ent gonna deny. I ent gonna play regret like I should like I should –- should I play polite? We're family we're beyond –- and family don't do polite do they?” says Sister 1 (Quincy Tyler Bermstine), harshly laying it out for hurting Dawta (Heather Alicia Simms) and the audience in the third scene of Born Bad.

The way this scene is played -- with Sister 1 humorously nasal, smiley, and most frighteningly of all, ambivalent, while talking about something as dark and disgusting as what is first unsaid, but is by now guessable as Dawta's sexual abuse at the hands of her father (Michael Rogers) -- wonderfully establishes the many questions and attitudes that the taut, 70-minute play will attempt to explore, and what makes it memorable. Because in Born Bad, it's more complicated than a case of did-he or didn't-he. It's more a case of do-they-care or don't-they.

The result is a dramatically sound, if sometimes mundanely caustic, array of scenes with a serious group of actors spitting out accusations and obscenities at each other, all in the peace-and-love patois of Jamaica, whose language and affect playwright debbie tucker green and director Leah C. Gardiner wonderfully twist and toy. Sister 2 (Crystal A. Dickinson), given the biggest case of denial of Dawta's truth, for example, is also given the thickest accent and the biggest blocks of dialogue with “yu”s and “ennit”s to spar with. Perpetrators Mum and Dad are mostly quiet, and bystanders Brother and Sister 1 are appropriately middling and American.

Taking place in one day, it is those kind of details in which the play's strengths lie. Ones of word choice, inflection, blocking, and surface elements of the actors, like skin tone, wardrobe and general physicality. For that, it is unique and near perfect in its microscopic depiction of a real family unraveling moment to moment. Once a character comes on stage, they stay there, forever a part of the proceedings. The psychology of siblings and abuse in families is all fascinating and presents a story that does not get told enough in detail. It makes the unspeakable real.

Unfortunately, the successes in which the play lives are also the ones by which it struggles. Sister 1 lacks sympathy for Dawta, although she basically confirms Dawta's story; once the truth is out there, little is done to develop, twist, or explore Sister 1's reaction. Further revelations of more abuse keeps the story circular. Also, Mum's position on the allegations is reported one way by Sister 1, and is then repeated later by Mum herself, in the exact same wording. The question of whether or not Dawta was “born bad” is often broached throughout the play, but this idea similarly just gets batted back and forth without finding a place to land.

To truly enjoy Born Bad, you have to accept it as a play of language and relationship, not of plot, mystery or surprise. Playwright green is interested in the abstract notion of a family, climaxing in a scene where all the family members are sitting in chairs and Dawta is urged to as well. Whether or not you are the type of person that can get emotionally invested in symbols, and if someone will simply “take a seat” or not, will largely affect your enjoyment of this play.