By Bryony Lavery; Directed and Choreographed by Scott Graham and Steven Hoggett 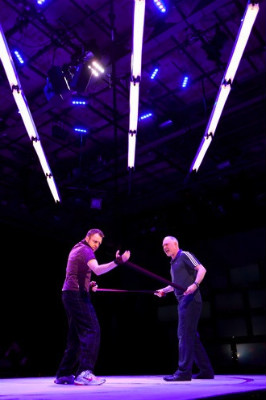 BOTTOM LINE: A wonderfully theatrical piece, in which a solid play becomes unforgettable because of several beautiful and energetic dance/movement numbers.

If you saw Black Watch, then you have some idea of the beauty and wonder that choreographer Steven Hoggett is capable of. (And if you didn’t see Black Watch, I urge you to check it out when it returns to St. Ann’s in April). With co-director and choreographer Scott Graham, Hoggett has created another piece of theatrical magic. Far superior to much of the theatre that plays in Manhattan, Beautiful Burnout is absolutely worth the trip to DUMBO.

Beautiful Burnout is, at its core, a fairly traditional play about a boxing gym in Scotland. Owner Bobby Burgess (a wonderfully grizzly Ewan Stewart) coaches four young men, and one woman, who all want to move from the amateur circuit to the professional arena. Some do, and some don’t, creating tension and conflict among the trainees. As we see them warm up, spar, and discuss strategy, we learn about the scrappy world of amateur boxing, and about what can happen during three minutes (the length of a round). And through one of the boxer’s mothers (Blythe Duff), we also see what it is like to watch a loved one participate in a sport that some view as noble, but which others find barbaric.

On its own, Lavery’s play would be a nice, comfortable piece of theatre. Successive scenes in the ring are interspersed with monologues in which characters directly address the audience. The five amateur boxers are distinct and well-developed. Even their names (Neil Neill, Ainsley Binney), often repeated by Coach Burgess, help develop character, as in the scene in which the boxers fantasize about how their real names might become catchy slogans once they become famous.

However, while the script is decent, the main reasons to see Beautiful Burnout are the dance numbers. With driving techno music by Underworld, these periodic breaks in the narrative are some of the most exciting pieces of theatrical movement I have seen in a long time. In one, a mandated workout session takes on a rhythmically meditative feeling. (I kept thinking- if only going to the gym was this magical!) The final match might be my favorite boxing scene ever (including any boxing movie you can think of), one in which the rest periods between rounds are as precise and fluid as the fighting sequences. And even an otherwise banal moment, in which Coach Burgess first wraps newcomer Burns’s hands, takes on ritualistic importance because of the stunningly graceful movement that arises seemingly out of nothing.

Laura Hopkins’s simple set, a raised boxing ring backed by a wall of television screens, holds some surprises that I won’t reveal here. The audience sits on three sides of the ring, although from what I could tell, a lot of the action is directed primarily to the center section. I’m not sure, but those of us who sat there seemed to have a slightly better view.

There are a lot of similarities between Beautiful Burnout and Black Watch, and I must admit, I think Black Watch is the better piece. Both deal with themes of masculinity, brotherhood, and loyalty amongst lower class men (and women) who don’t have many choices in life. And while both make use of a similar structure, the movement in Beautiful Burnout is less fully integrated into the piece, or perhaps there is just less of it. That said, Beautiful Burnout is still excellent theatre. Think of it as an appetizer that whets your appetite for the returning Black Watch. Either one is great on its own, but for the full meal, I’d suggest seeing both.