Tickets are $18 and are available at spoontheater.org 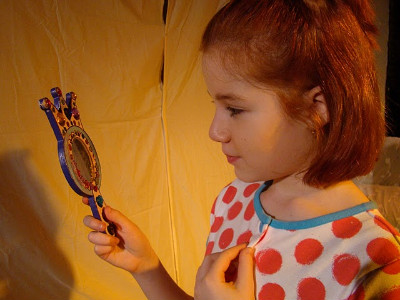 BOTTOM LINE: Despite a classic story, poignant themes and some breakthrough performances, Bad Seed lacks good direction, and is overall a disappointing production.

Eight year old Rhoda is seemingly the perfect child of Christine and Kenneth Penmark. She’s neat, smart, polite, and charming, although Rhoda’s mother suspects that her daughter isn’t quite right. Kenneth leaves Christine alone with Rhoda to go on a business trip, and Rhoda’s odd demeanor takes an even stranger turn after a classmate mysteriously drowns. Christine is disturbed by Rhoda’s detached attitude towards his death, and begins to suspect her child of murder – multiple murders. The play grapples with the concepts of nurture and nature, asking if a little girl raised by two perfectly loving and doting parents could turn into a careless sociopath, a "bad seed."

Bad Seed is based on William March's critically acclaimed novel by the same name. It was adapted into a hit Broadway play in 1955, and then into a popular movie a year later. It is a classic and brilliantly scripted work, and one of my all time favorites. Unfortunately, the Spoon’s production of Bad Seed is neither classic nor brilliant.

There are some acting highlights that make the evening agreeable. Eleven year old Lee Eden, who plays Rhoda, shows maturity and talent beyond her years. She handles the more serious scenes in the play with such realism and intensity that I heard audience members talking after the show about how creeped out they were by this kid. Wynne Anders, as the Penmark's nosey next-door neighbor, has unquestionable confidence in her larger-than-life facial expressions and fast-paced delivery; the velocity at which the words come out of her mouth is astonishing, making you think she was born to play this type of character. Tim Romero as Leroy and Sharon Hunter as Christine also have some riveting moments.

Bad Seed’s pitfall is the direction. Director S. Barton-Farcas either intervened too little or way too much in the rehearsal process. I’m banking on too little. Dramatic moments are disappointingly glazed over for non-dramatic afterthoughts, which results in lots of awkward pauses and rushed emotions. The play’s natural rhythm and beats are off, creating an unnatural atmosphere that the less experienced actors can’t break out of. There are too many moments in which characters stare pointlessly out into the audience, so an effect that might work if used sparsely becomes the default position of stranded actors onstage. It is frustrating to watch obvious missed opportunities for good drama.

This production also suffers from poor casting and sound design choices. Morgan Sills, as Christine's father Richard Bravo, is clearly a good actor and does a lot with his role, but he is way too young for the part. Despite wrinkles drawn on with stage makeup, he reads years younger then his daughter. The original music by Damon Law is played too sparsely to constitute a theme, and instead just comes off as overly dramatic – a slip of the sound designer, a role also filled by Barton-Farcas. While the last scene of the play is powerful, the tinkering music is a bit distracting. And while I understand that Off Off Broadway shows don't have large budgets, the set pieces and props are somewhat mis-matched, and the sheets with holes are a bizarre choice for walls.

Classic plays with big casts can be difficult to produce, especially Off Off Broadway, and Bad Seed is no exception. This play has eleven different characters to keep straight, a challenge for both the director and audience member, especially in a small space like Nicu's Spoon Theater. And the script isn't perfect – there are some moments that were probably riveting back in the 1950s, but sound a little cliché now. However, with the right elements in place, this play could likely still be as chilling now as it surely was fifty years ago.

(Bad Seed plays at Nicu's Spoon Theater, 38 West 38th Street between 5th and 6th Avenues, through April 24th. Performances are Wednesdays through Saturdays at 8 PM, and Sunday at 2 PM. Tickets are $18 and are available at spoontheater.org or by visiting the box office 30 minutes prior to the show.)