• Includes a step dance and music

Arrah-na-Pogue, Or, the Wicklow Wedding

Off Off Broadway, Play Revival
Runs through 4.2.11
The Storm Theatre at the Theatre of the Church of Notre Dame, 405 West 114th Street 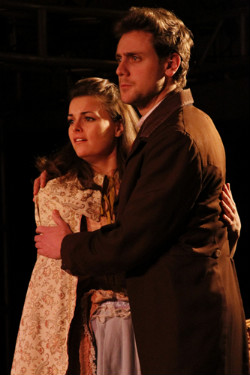 BOTTOM LINE: A delightful family-friendly tale of adventure and romance set in the time of the Irish Rebellion in 1798.

Arrah-na-Pogue, Or, the Wicklow Wedding, written by Dion Boucicault in 1865, is wonderfully uplifting entertainment suitable for the entire family, that is too infrequently staged in America and deserves to be better known in this country. A joyous, adventurous, romantic Irish comedy-drama, it has all the ingredients one seeks in the theatre and too seldom finds: charming tales of love (requited and unrequited), romance, marriage, honor, fidelity and betrayal, swashbuckling escapades, and causes and relationships that both men and women are willing to die for. It is Damon and Pythias, Robin Hood, Casablanca and King Arthur, all rolled into one, set during the Irish Rebellion of 1798, expressed in the most lyrical language for which the Irish seem to have such a flair, and punctuated at just the right moments by a rollicking performance of an Irish step dance by Jennie McGuinness and a lovely rendition of “The Wearing of the Green” by Michelle Kafel.

Presented by the Storm Theatre at The Theatre of the Church of Notre Dame (a very well-designed theatre in the church’s basement), the play centers around Arrah Meelish (Nicola Murphy), nick-named Arrah-na-Pogue (Arrah of the Kiss) for the kiss she once bestowed upon her sweetheart, Shaun the Post (Phil Mills). Unbeknownst to him, Arrah has been providing sanctuary to Beamish Mac Coul (Jonathan Blakeley), a leader of the Rebellion who is attempting to escape from Ireland with his sweetheart, Fanny Power (Christine Bullen). When Michael Feeny (Paul Nugent), a traitorous, disreputable process server, happens upon Beamish’s concealment by Arrah and betrays them both to the British authorities, all hell breaks loose. Beamish escapes, Arrah is questioned, Fanny misconstrues Beamish’s relationship with Arrah, Shaun rises to the occasion, and Colonel Bagenal O’Grady (Ted McGuinness), who is also in love with Fanny, seeks everyone’s salvation with the assistance of the British secretary (Spencer Aste).

The play’s success is more a function of the script itself than anything else: it is well-written, charmingly plotted (albeit a bit hokey, to be sure), and just a great deal of fun. But having said that, credit must also go to the director, Peter Dobbins, who used the theatre’s space in the most imaginative fashion. The entire cast also does a terrific job, especially Murphy and Mills, as the most naive and devoted of lovers who bring not only passion but also comedy to their relationship; Bullen and Blakely, whose more realistic take on life provides a fine contrast to that of Murphy and Mills; McGuinness, whose expression of paternalistic compassion and selflessness is finely tuned; Aste, whose deftly wry depiction of the secretary is just splendid; and Joie Bauer who plays to perfection the role of Major Coffin, a cold-hearted British Officer.

But the most outstanding performance of all is that provided by Nugent who plays the role of the villain as if he were a sleazy, serpentine leprechaun-ish creature. He is perfect as the character you love to hate and the production wouldn’t be nearly as much fun without him.

(Arrah-na-Pogue Or, the Wicklow Wedding plays at The Storm Theatre at The Theatre of the Church of Notre Dame,114th Street and Morningside Park, one block from Columbia University, through April 2, 2011. Performances are Thursdays through Saturdays at 7:30PM and Saturdays at 2PM. Tickets are $25 and are available at www.smarttix.com or by calling 212.868.4444.)