The Resistible Rise of JR Brinkley

Written and Directed by Edward Einhorn
Produced by Untitled Theater Company No. 61
Part of the 2018 New York International Fringe Festival

Off Off Broadway, Play with music
Runs through 10.28.18
FringeHUB, 685 Washington Street 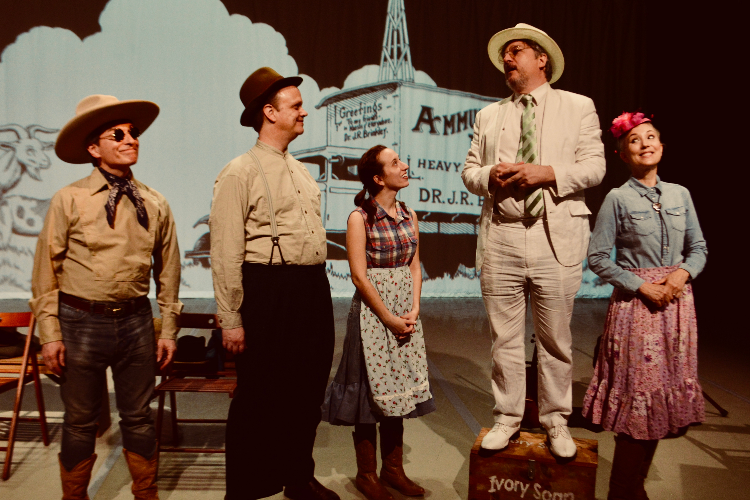 BOTTOM LINE: History will teach us nothing. The forgotten media personality, politician, and quack doctor JR Brinkley was the Trump of his time.

The Resistible Rise of JR Brinkley greets the audience with a folk violin solo by Julia Hoffmann. Behind her are stools, instruments, a bench, a table, and a soapbox. There's also a giant screen projecting a drawing of goats. At first it feels as though you are about to see a bluegrass concert, but as the lights go down, John Blaylock introduces himself as the narrator and explains to us what we'll see. For those who haven't figured it out yet from the title (or the immediate breaking of the fourth wall), Blaylock notes that the play is influenced by Bertolt Brecht’s The Resistible Rise of Arturo Ui.

Edward Einhorn’s play chronicles the life of John R. Brinkley (Trav SD), a fraudulent early-20th-century medical doctor who claimed to have found the cure for erectile dysfunction—transplanting goat testicles into men. Supposedly patients would absorb the goat gland and be cured. He took up newspaper ads featuring babies who had been born as a result of his work, and despite some patients suffering horrible ailments due to his procedures, enough felt the placebo effect for Brinkley to gain a following. With his earnings he started a radio station where he could talk about his miraculous work. In between rants he would play folk and bluegrass songs.

The play moves on to show how the head of the American Medical Association, Dr Fishbein (Julia Hoffmann), grew suspicious and was able disprove his methods, so Brinkley was stripped of his medical license. Regardless, he still had a passionate fan base and decided to run for Governor of Kansas as a write-in candidate. He won the popular vote, but not the governorship, so he moved to Texas where he bought a bigger radio station and began broadcasting all over the United States and in Mexico. His popularity continued to grow and he found other ways to practice medicine.

Trav SD—a larger than life character dressed in white proclaiming himself “the most honest man in the world"—nicely captures the essence of J. R. Brinkley. Though at times the actors lack energy, they swap roles fluidly and look as if they are enjoying themselves. They also all play instruments and sing—it often feels like a radio play. Thanks to Einhorn's direction, the minimal set serves the rapid scene shifts well. Ramona Ponce’s cowboy costumes are a good base for the actors to add and take away pieces quickly when switching between characters. And projections of Eric Shanower's scenic art, representing each stage of Brinkley’s life, help to create a nice depth to the stage.

In his program notes, Einhorn says he was interested in the way we put con men within American myths. “In some ways we scoff at them, but in others they are an embodiment of the American Dream.” This production clearly parallels what is happening today, and shows how history repeats itself. J. R. Brinkley was a radio celebrity: regardless of his faulty medical practices, his voice was broadcast directly into living rooms, turning him into a relatable everyman. If things had worked out differently, he might have become President of the United States.