Stranger Than A Rhino

Off Off Broadway, Play
Runs through 10.20.18
FringeHUB, 685 Washington Street 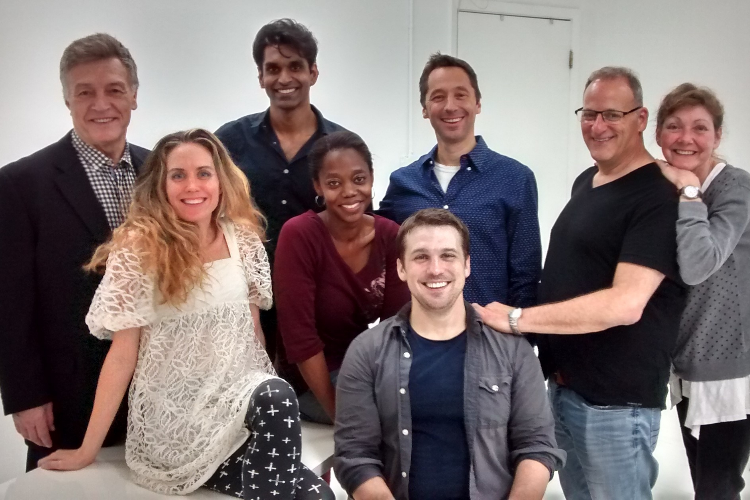 The cast of Stranger Than A Rhino.

BOTTOM LINE: With love to Ionesco's Rhinocéros, rampant Islamophobia is the new fascism.

Robert Siegel's Stranger Than A Rhino is a timely play that examines xenophobia in the American heartland. William Roudebush directs this play, which takes Eugene Ionesco’s absurdist work Rhinocéros in a new direction, flipping the script on flipping the script. Les (Jeremy Lister) is auditioning for a role in a top-secret new play helmed by famous director Delia Malvern (Barbara Matovu), who is known for reimagining classics. Les, who does not have a theater background, is hailed as a natural; however, when Delia whispers to him the theme of the play, he is ready to turn the project down—he used to live in New York, and lost his fiancée on 9/11. Delia asks him if this role isn’t the best opportunity to deal with his painful past and establish his career at the same time.

And so we shift to the world of the play, which is a bit like Rhinocéros, set near Tulsa, Oklahoma. Les plays Bruce, a character who sits in a diner with Gene (Charles Rubey), while Mrs. Stoof (Leslie Lynn Meeker) pours coffee for local patrons Frumpf (Scott Zimmerman), Dudley (David Shakopi), and Rose (Amanda McCallum). Bruce, the only one not dressed up on a Sunday morning, reeks of cannabis and unfiltered opinions. To the surprise of all those paying attention, an unnamed Muslim walks right through the diner, speaking in Arabic. No one is sure it really happened until the Muslim again walks by on his way out. Muslims don't live in their town, and everyone except Les becomes very suspicious.

We then shift back and forth between this adapted play and the offstage interactions between cast members. Waseem (Vick Krishna), the actor who plays the Muslim, attempts to chat with Les about Les's previous job in Singapore, but Les is curt, and clearly does not wish to get to know Waseem. As Les, Lister has the challenging job of being affable with the white cast members and antagonistic towards Waseem, which he achieves with subtle theatricality. As Waseem, Krishna endures the absurdity of American life to emerge as the real good guy.

Back in the world of Malevern's play, the townspeople have their own particular interactions with the Muslim, which we learn used to be Mrs. Stoof’s husband of many years. Just as people in Ionesco's play start turning into rhinoceroi, so do folks here turn in Muslims, and at least for a bit, the townspeople clearly equate Islam with terrorism. Yet as time goes by, the ways of the Muslim are seen as desirable, and only Bruce resists the trend.

In past years, Siegel has brought work to FringeNYC that is informed by other works of classic 20th-century literature about the coming together of folks who, until they meet, may have been afraid of the “other.” Yet this play isn't just a re-do of Rhinocéros, in which turning into animals is a metaphor for the rise of fascism. To be clear, Siegel's point isn't that Islam is like fascism—it's that Islamophobia is. Indeed, Delia pushes the cast to ask Bruce—and Les—why he feels the way he does. (Although while portraying the way racists behave is clearly the point, to be honest, some might find it uncomfortable watching folks yell at Muslims the way they would yell at animals.)

With Stranger Than A Rhino, Siegel explores questions of isolationism, cultural identity, and why Muslim immigrants would try to assimilate in order to avoid violence. With the resurgence of white supremacy encouraged by yet another gang of idiots, now is just the right time to see a play about collective madness, destructive ideologies, and the dangers of isolation.

Stranger Than A Rhino is by Robert Siegel. Directed by William Roudebush. Lighting Design by Kathrine R. Mitchell. Stage Manager is Linda Elizabeth.