Off Off Broadway, Children's Theatre/Clowning
Runs through 10.28.18
FringeHUB, 685 Washington Street 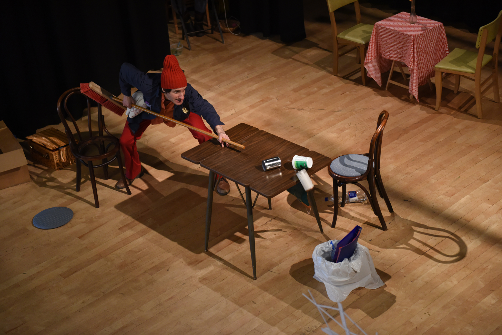 BOTTOM LINE: A charming children’s show about an American clown in Paris.

Taking its name from an Indian word for “joy,” the Swiss-American Piti Theatre Company’s aim is simple: to delight audiences and artists alike. In its children’s show Sammy and "Le Grand Buffet," Piti lives up to this mission, as its clownish protagonist conquers clumsiness and language barriers to make us smile.

A childlike voice identifying as Sammy’s “guardian angel” (Ezekiel Mirin) welcomes viewers and gives context: Sammy (Jonathan Samuel Mirin), an American working in a Parisian restaurant, has a heart as big as his French (and organizational) skills are limited. Ordered by his boss to prepare the space for an important dinner known as “Le Grand Buffet,”  the angel instructs us to help the hapless Sammy complete his task. With help from our program’s French translations, we guide Sammy as he sweeps (balayer), collects trash (poubelle) and arranges music stands (lutrin) and other items for the event.

This loose structure forms a canvas for Mirin’s versatile performance, incorporating clowning, prop comedy, sleight-of-hand, and original music. Through these combined elements, Mirin makes Sammy’s chores surprisingly entertaining: he wields his push broom like a hockey stick or tennis racket, shoots trash with it like a pool cue, and twirls it it in a Gene Kelley-esque “sweepin’ in the rain” number. Scattered tangles with an old chair, broken garbage bags, and the stubborn lutrin keep us laughing throughout. With magnetic tin cans and intertwined handkerchiefs, Mirin’s magic tricks elicit gasps of awe—or precocious commentary—from young audiences.

Sammy thrives on audience interaction, incorporating rather than discouraging children’s curiosity and unfettered responses. Mirin responds directly to kids’ laughter or admonitions and warns against trying his stunts at home; it’s clear he enjoys these moments as much as we do. When Sammy’s antics become tangential, the angel’s voice returns to gently keep us on task. Later in the show, Mirin invites children onstage to assist him with clean-up, and treats adult viewers to vanishing omelettes and ukulele songs as "Le Grand Buffet’s” first customers. In a society, and theatrical culture, where public response is tightly regulated, it’s refreshing to have a space where youthful silliness and self-expression can run free.

Though children’s shows, particularly those driven by physical comedy, can seem facile as longer-form theatre, Sammy draws strength from this simplicity, its loose narrative guiding Mirin’s talents while giving them ample room to thrive. True to its title, the show offers comforting, solid fare, with just enough diversity to bring us back for more.