Jackie and Johnny and the Whoracle Named Daphne

Written and Directed by Kevin P. Joyce
Produced by Not the Normal Productions, in collaboration with Dry with a Twist Theatrics
Part of the 2018 New York International Fringe Festival 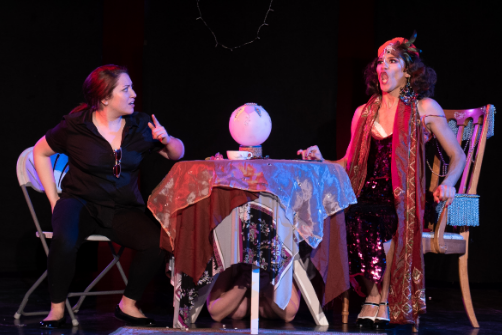 Vanessa Guadiana and Frankie LaPace in Jackie and Johnny and the Whoracle Named Daphne.

BOTTOM LINE: A con man, a whore, and a drag queen attempt to cash in on mysticism in this raunchy new comedy.

In a dilapidated bungalow in Miami, Florida, we meet a greasy yet charismatic brute of a man named Johnny Malone (Ben Dawson) and his gorgeous girlfriend Jackie Leigh (Frankie LaPace). It’s clear from the get-go that we are not dealing with a conventional relationship—Johnny is a two-bit con man enamored with the smell of used underwear, and Jackie is a fierce drag queen seemingly addicted to her masochistic relationship. Throw in Daphne (Caroline Lyons)—just about the grossest hooker to have been scraped off the bottom of a flip-flop—and you have the perfect set up for joke after joke.

Whoracle’s story is an entertaining hodgepodge—part Monty Python, part The Bird Cage, part Blithe Spirit, and part Scary Movie. While trying to navigate his commitment issues, Johnny cooks up the idea to set up his own mystic shop—with Jackie as the “Miss Cleo” of sorts. Convinced that Jackie can do a good enough job of making stuff up, the two embark (with much hesitation from Jackie) on swindling those poor souls desperate to connect with their long-lost loves ones. Daphne enters this equation initially as Johnny’s new roommate, but it quickly becomes apparent that she possesses a genuine ability to commune with the deceased. Soon, the motley crew begins to cash in on their combined abilities, while a sub-plot reveals (through the use of about ten characters all brilliantly performed by the one-woman army of Vanessa Guadiana) that Johnny’s incredible debt to the mob is soon catching up with him.

At least in the first half, Whoracle is a near knock-out Fringe production. As soon as the lights come down, the audience is kept in stitches. While some may find the jokes crude and low-brow, there’s no doubt an appreciative audience will easily be found. Great performances are given all around, but it’s Lyons that truly steals the show, painting a woman so profoundly ignorant and deplorable, yet so wonderfully emotional.

But the two acts feel like two different shows, both in terms of comedy and overall feel. While the first act is bawdy, raunchy slapstick, act two suddenly becomes—not even a melodrama—but a mellow drama. And whereas the very over-the-top first act remains grounded, act two literally has someone, for no reason, throwing their lap cat over the wall behind them. In essence, the second act panders for audience reaction while the first act stands confidently on its own. That being said, Jackie and Johnny and the Whoracle Named Daphne is great fun—it has laughs, heart (if occasionally a bit forced), and is quite possibly one of the better Fringe productions I’ve seen to date.