Written and Performed by Sarah Cuneo, based on the writings of Infanta Eulalia of Spain;
Directed by Brad Wilson
Part of the 2018 New York International Fringe Festival

Off Off Broadway, Solo Show
Runs through 10.22.18
FringeHUB, 685 Washington Street 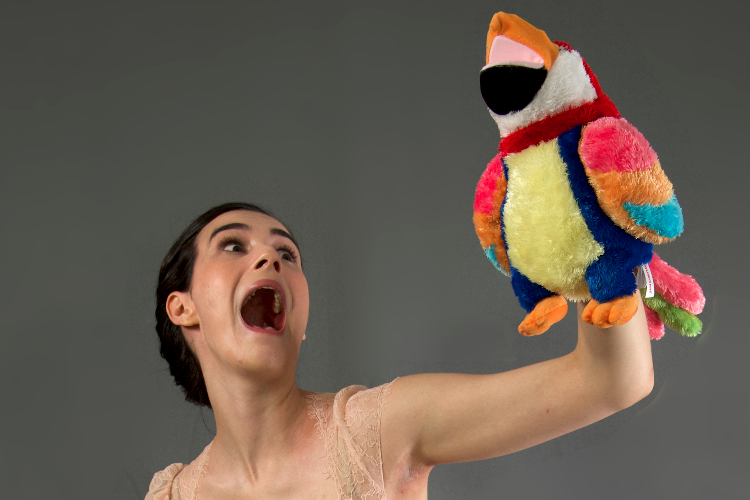 BOTTOM LINE: A fascinating look at how Princess Eulalia of Spain must break out of her social roles to become a writer.

Eulalia: A Bedtime Story, a solo play written and performed by Sarah Cuneo, is about the eponymous princess of Spain, who lived from 1864 to 1958—an astounding 94 years. Eulalia focuses on how the princess must reconcile the social constraints and responsibilities of being 19th century royalty with the urge to travel and become a writer.

in Eulalia, Princess Eulalia’s biography is framed as a bedtime story to children, with Cuneo as the storyteller. This allows director Brad Wilson to tell the story using toys and other things found in a kid's bedroom. So at times, the toys symbolize inundation, as when Cuneo loads toys representing people and unceremoniously dumps them. The device also allows for more intricate metaphoric storytelling, as when Cuneo uses a parrot puppet to explain the complicated somersaults of the tumultuous Spanish monarchy, which was dismantled and then reinstated.

Because of its foundational concern with Princess Eulalia as a public intellectual, Eulalia takes on additional resonance against the backdrop of the #MeToo movement. In this play, and in her life, Princess Eulalia is trapped by an arranged marriage to her cousin, Infante Antonio. In addition to the incest factor (admittedly not uncommon in royal families), Cuneo sees the royal marriage as purely political—only for the purpose of having children—and therefore a waste of a brilliant mind. Eulalia eventually escapes her social confines, allowing this play to have a delightful twist at its end—not to be spoiled here.

Cuneo’s work is historical fiction, based on letters, accounts, and Princess Eulalia’s own writings. Like other epistolary works that draw from historical letters and other first-hand accounts, like Jackie Sibblies Drury's We Are Proud to Present a Presentation... (which played at Soho Rep in 2012), Cuneo's inspirational account reminds us just how relevant the past can be, both now and in the future. Given the general disappearance of letter-writing and the handwritten word, and the intimacy this invites, one can only wonder how this will change how future historians and dramatists capture our current moment.

Eulalia: A Bedtime Story is written and performed by Sarah Cuneo, based on the writings of Infanta Eulalia of Spain. Directed and Dramaturgy by Brad Wilson. Lighting Design by Vittoria J. Orlando.