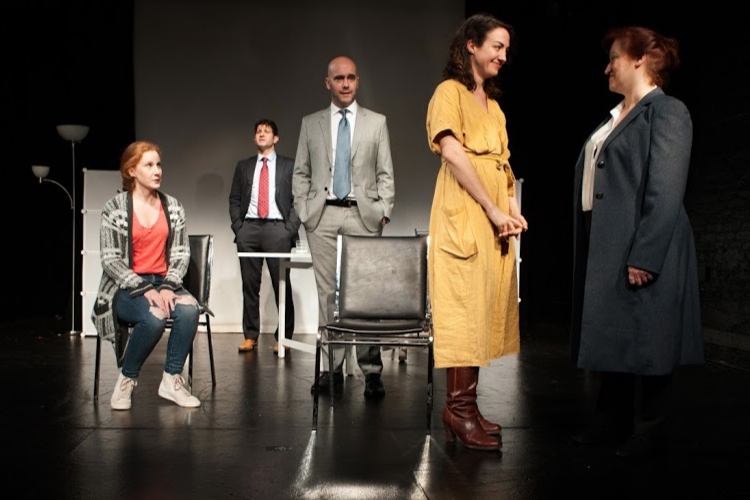 BOTTOM LINE: A play about #MeToo’s many questions of veracity and justice.

Escape tells the story of a flight attendant (Marlowe Holden) who must face the consequences of a violent incident on a flight: she stopped a passenger who tried to escape by opening the door while in air. This all takes place before play begins, and it’s not clear if her violence was justified. The first part of the play deals with the exposition of these events and how the airline's CEO (Rhonda Ayers) and her team—a lawyer (Chris Wright) and Board of Directors liaison (Jim Thalman)—are dealing with the catastrophe. The second part deals with the doubts of the CEO’s co-administrators and, in separate scenes, those of the flight attendant’s friend and roommate Deena (Deya Danielle Drake, also the playwright). The last scenes offer resolution (and won’t be spoiled here).

The central incident is reminiscent of United Airlines' 2017 public relations debacle over an overbooked flight, where a doctor was forcibly removed from a flight by being beaten up and bloodied, and the flight attendant was criticized, in part because of her gender. Flight attendants have been victims of sexual harassment for decades, and Escape acknowledges as much when the Board of Directors liaison talks about them in crude terms. However, the play complicates the question of the flight attendant's character when she and her roommate exploit the event for fame on social media. Meanwhile, the airline's CEO has to deal with the sexism of her two male counterparts.

The flight attendant's trauma must be examined by the public at large, by the CEO and her team, by her roommate, and ultimately by the flight attendant herself. Did the passenger attack her? Was she justified in retaliating? Did she retaliate enough? Escape is a defense of victims and an endorsement of the #MeToo Movement, and its final scenes are hard-won catharsis.