Off Off Broadway, Musical
Runs through 10.22.18
FringeHUB, 685 Washington Street 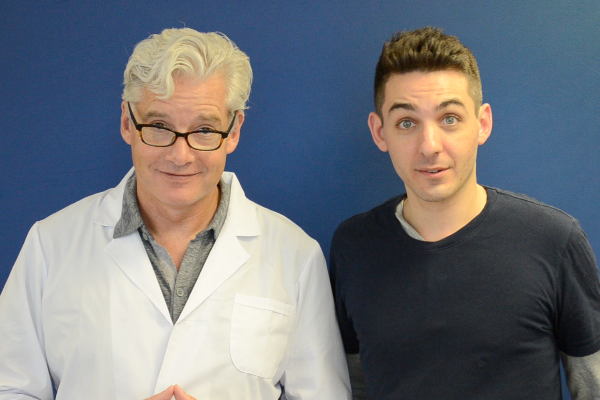 BOTTOM LINE: Enlargement is a joyfully juvenile, but also smart, musical comedy, with terrific songs and a light-hearted spirit.

The new musical Enlargement tells the story of Benny (Jake Smith), who wants confidence to be more popular in high school. Benny goes online and mistakenly clicks on spam, but in perhaps the play’s most fantastical element, the spam works, and sells penis-enlargement pills that are actually effective. This tarzanium supplement is the creation of mad scientist Professor von Plume (James Donahower). Benny’s newfound extension gives him confidence to talk to girls, sing at a pep rally, and stand up to bullies that he didn’t have before. When his friends at school, including Mike (Ken McGraw), find out he’s taking the pills, trouble and hijinks ensue.

Enlargement takes musical theatre show tunes and adds dick jokes, innuendo, and double entendres, so the musical is both familiar and original, reminiscent of South Park and The Book of Mormon. Audiences will love how Enlargement’s excellent songs vamp solos and choruses over prolonged outros—each actor knows how to hit their last notes and hit them hiiiiiiighhhhhh! As for the dick jokes, Enlargement has LOTS of them. And these jokes hit—they run fast, whether puns, songs, or both. The key ingredient might be the critical distance granted by the fact that this musical borders on the extremely wacky. Whatever it is, the ensemble sells the writing well.

But Enlargement isn't all dick jokes. At one point, Russian pharmacy spammer Evka (Cynthia Bonacum) breaks out her ukulele to sing about Judy Garland. Garland, who in real life died from a barbiturate overdose, is portrayed here optimistically, as a world traveler in The Wizard of Oz, and Evka's song is about the courage to be oneself. To the extent this is about the limits of a musical to persuade its viewers to take this courageous perspective, this song is a patient and loving lament. The answers might be in a pill, or in love, and maybe somewhere else, too.

While there is a big and surprising climax (sorry) to this musical, the final song is somewhat quieter, and talks about love. In fact, the ending is oddly mature for such a willfully juvenile play. The more self-conscious Benny gains a new perspective, and learns that the positive consequences might not be what he had expected. Enlargement is a smart, funny musical, and highly recommended.