Off Off Broadway, Play
Runs through 10.27.18
FringeHUB, 685 Washington Street 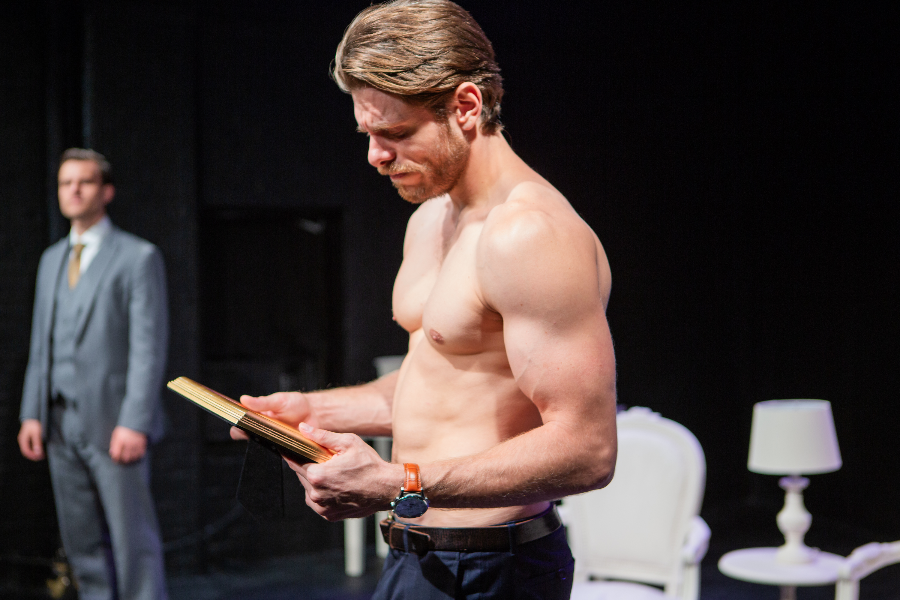 Trevor St. John-Gilbert and Shawn Thomas Diefenbach in Among the Furies. Photo by Iris Johnson.

The Sartre quote "Hell is other people" certainly proves to be true in Among the Furies, a modern spin on Tennessee Williams' A Cat on a Hot Tin Roof where two couples in rural South Carolina drink past the point of excess and begin to slowly destroy one another as hidden truths and dark secrets are brought out into the open.

At a mansion in rural South Carolina outside of Charleston, married couple Vera (Claire Ganshert) and Henry (Trevor St. John-Gilbert) are cleaning up discarded red cups from their living room floor and sweeping up the shards of a shattered family heirloom vase, as they wonder just how so many uninvited guests managed to find their way to their party. Vera lifts the blanket off their sofa only to find Penny (Yani Marin), one of the aforementioned uninvited guests, sleeping beneath it. Shortly after, Penny's husband Aaron (Shawn Thomas Diefenbach) comes looking for her.

While Vera is initially quick to push the guests out, Henry is not yet ready to call it a night and starts to pour drink after drink even as the others attempt to decline. We soon learn the real reason Aaron and Penny stayed long after the other guests have left: Aaron wants to be hired by Henry's company. While both at first pretend to be well-heeled men with impressive resumes, the darker truths about their desperation and unhappiness slowly spill out. As the drinks flow and tempers rise, cracks begin to show in the seemingly happy marriages.

Scala's dramatic script is packed to the brim with emotional rollercoasters. The cast, for the most part, is up for this challenge and, with Scala directing, they add authenticity and nuance to the drunken arguments and bellicose conversations. Claire Ganshert is especially good; she manages to make Vera's mercurial emotional state convincing and worthy of our empathy. Scala allows the play's mysteries to unfold slowly, providing enough suspense and character development to keep us riveted. Andrew McCourt's set, with furniture and props painted a uniform matte white, allows the focus to be kept on the actors while also providing a palette for imagination. The suggestion of an ornate staircase and a projection of an ostentatious painting (hinting at the violence and vitriol that is to come) all help to evoke a home with a facade of grandeur, one that is representative of the characters' ambitions and unfulfilled desires. Among the Furies succeeds as an homage to Williams' trademark explorations of the unrealized American dream and lives spent in self delusions

Among the Furies is written and directed by David Scala. Set Design by Andrew McCourt. Stage Manager is Kat Norton.