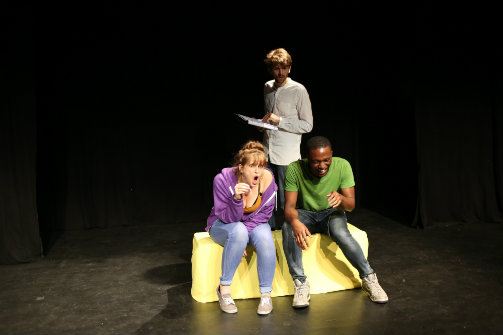 BOTTOM LINE: Do any of us matter in a volatile universe?

If you want a play to chew on, this cerebral Fringe show is the one for you. It’s piercingly appropriate for a time when “Black Lives Matter” is countered by “All Lives Matter," and mass outrage and hate seem to be growing throughout the world. You Don’t Matter offers an ominous fate of what lies ahead for society if we don’t ascend to our better selves and be good to each other, especially those we claim to love the most. There is also a darker fatalistic message pulsing through the play: perhaps it doesn’t even matter if we do alter our inherently cruel nature for the better; in reality, we don’t matter at all. Are humans destined to self-destruct despite their greatest efforts?

The godlike Narrator (Paul Morris) opens the play with a hair-raising existential monologue about the improbability of our very existence. This is the highlight of Morris’ performance, his body shaking with terror and bewilderment at once. The tone dramatically shifts to Anna (Whitney St. Ours) and Robert (Corneilus Franklin), who just hit the six-year mark in their relationship. They argue about the petty little things many couples find themselves wrapped up in—what to watch on tv, what’s for dinner, and how to microwave food properly without making a mess. It’s evident that these two love each other deeply (kudos to St. Ours and Franklin’s genuine portrayals), yet they are both depressed and somewhat helpless individuals who can’t seem to get out of their own way.

The Narrator effectively breaks up their scenes with jarring accounts of real-life events: nuclear weapons, mass shootings, the statistic that one of us (the audience) will be dead in the next five years. This theatrical device emphasizes the triviality of the couple’s “problems”—until it gets serious when Robert commits suicide. At that point, Anna becomes aware of The Narrator’s always-watchful presence and becomes gifted with the power to reverse time. She has good intentions of amending Robert’s past and ultimately saving him, but spirals into a drug-induced rampage just as fast.

There is a complicated and unclear contradiction in this story concerning Anna’s agency in effecting their future. Within the rules of the play, she has the power to make real change in her and Robert’s lives by way of rewinding time. If she weren't so greedy with this power there might have been a happier outcome, though her fatal end is a result of happenstance. It tangles the idea that “you don’t matter.” I interpret the play as an invitation to explore the “All Lives Matter” movement—we each matter on a small scale, but time and the unpredictable cosmos is the true game-changer, and we are all its pawns. Each of us will die— “memento mori” as the production program attests. So the least we can do is spread and give love for the remainder of our finite time in this beautiful universe. You Don’t Matter reminded me of that.

You Don't Matter is by Paul Morris. Directed by Paul and Cassandra Morris.

The cast is Whitney St. Ours, Corneilus Franklin, and Paul Morris.