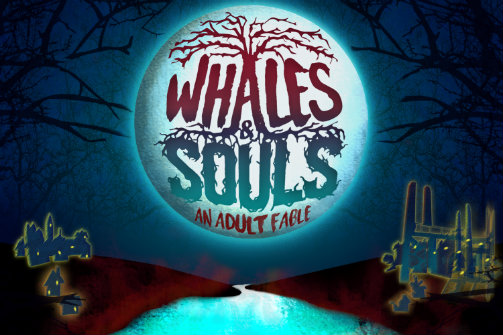 The first thing that needs to be said about Whales & Souls, and the first thing you notice upon walking in, is that it is a beautiful production. From Jonathan Parke’s eerie sound design to the stunning shadow projections made from Emily Palmer’s paper artistry, this show is aesthetically stunning. From the moment you enter the deep blue light of the theatre (designed by Marciel Irene Greene), you instantly feel as though you have been transported to another world where magic is most certainly possible.

Guiding us through this world is the cheery Parks and Recreations Department night tour leader by the name of Randy (Chris Roe) who regales the audience with the tale of a fallen town. It is the story of a budding queer romance between two women, a patriarch who loses his grip on his world, a secretly creative son, the ignorance of man and men, and the ominous appearance of a mysterious creature who has come to warn the town of impending doom should they allow distant corporate entities to continue to disrupt the land and toxify the lake with their plans for construction and monetization.

If all of this seems like a lot, and maybe even a bit confusing, it is. The story of Whales & Souls is undeniably complex, and the detailed writing which lends the play its fairytale feeling often leads to some confusion as one tries to glean necessary information and action from the surrounding lush description.

Still, despite the intricacy of the plot, Roe manages to keep the audience with him throughout the entire piece. He effortlessly portrays the seven different characters of the show, and the specificity with which he embodies each one means that there is never any confusion as to who is talking. His performance is energetic and enchanting. While some scenes, such as a sexually intimate exchange between two women, don’t read as well with one man performing them, it is safe to say that this is more due to the conceit of the format than to Roe’s work.

And speaking of format, despite clearly drawing inspiration from the single narrator history of oral storytelling, this play at times almost begs to be a cinematic experience. There are fantastic visual elements missing that the writing covers with the aforementioned lush descriptions, but which would perhaps be more enjoyable to fully witness visually, not just aurally.

In the end, Whales & Souls might be stretching itself a bit thin for the format of a Fringe festival show, but it is still a beautiful and entertaining production with a fantastic actor at its helm. It is definitely worth seeing for those who love folk stories or for anyone who wishes to see just how much can be accomplished technically by designers at the Fringe.

Whales & Souls is by Andrew Kramer. Directed by Matt Renskers. Choreography is by Erin Thompson. Set Design is by Christopher Swader and Justin Swader. Lighting Design is by Marciel Irene Greene. Sound Design is by Jonathan Parke. Additional Music is by Celine Neon. Paper Artistry is by Emily Palmer. Make-Up Design is by Alina Barreto. Stage Manager is Cassie Fraser.

The cast is Chris Roe.