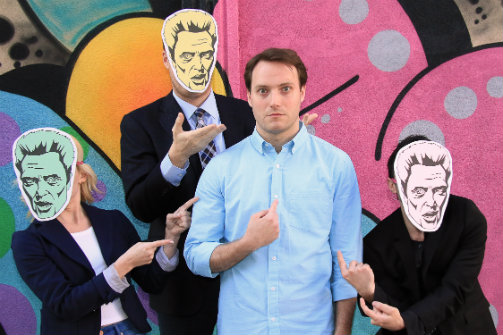 Dave Droxler in Walken on Sunshine. Photo by Tim Lorge.

BOTTOM LINE: A high-energy and thoroughly entertaining play where a pair of film-making brothers embark on a quest to find Christopher Walken—their future depends on it!

Walken On Sunshine is an exuberant, high-energy play with music, and it’s celebrating its premiere in this year’s Fringe at the Soho Playhouse. Gavin and Quinn are very close brothers, complete with a complicated and goofy handshake during moments of success. Their mother told them they were conjoined twins separated at birth. The two brothers, however, could not be more different, and not just in temperament; one is black, the other white, and while this causes consternation among some, others accept it without the blink of an eye…at least, for the moment. Convinced they are the next Matt Damon and Ben Affleck, they assemble a group to make a film that is a sure-fire hit. Problem #1: lack of funds. Problem #2: finding investors to provide said funds.

Gavin’s anxiety spikes as he and his brother pitch their film to investor after investor. During one brainstorming session the film crew jokes about needing a celebrity (like Robin Williams in Good Will Hunting) and they lightly suggest Christopher Walken. But at yet another meeting with a potential investor, Gavin has another panic attack and blurts out that Christopher Walken has actually agreed to be in their film. The investor is only too glad to write out a check. Thus begins Quinn and Gavin’s ridiculous crusade to find Walken and put him into their film.

Meanwhile, Gavin takes odd (and I do mean odd) jobs to make ends meet, and there he meets Jenny. It is clear they have awkward crushes on each other, right down to the flirty banter that goes wrong (“you’re the turtle’s sweat gland!”). When one of the investors demands to see Christopher Walken, Gavin has a breakdown and, when he comes to, has developed a Christopher Walken Alter Ego. He impersonates Walken—on the phone and behind a curtain—and bamboozles at least one of the investors.

Gavin’s Christopher Walken is assertive, confident, self-assured and fearless—in other words, almost the exact opposite of Gavin himself. This Gavin/Walken easily gets Jenny to go on a date with him, and the film seems to be in fine shape...until the elaborate charade starts to unravel. Gavin and Quinn’s brotherly bond is tested, Jenny leaves Gavin, and their motley film crew falls apart during a montage of sadness and despair. Can Christopher Walken save the day?

Walken on Sunshine is written by Dave Droxler, who also plays Gavin, and does a hilarious send-up of Christopher Walken’s speech patterns and physicality. James Rushin composes the music and plays the piano, providing an underscore just like in movies. It’s brilliant. Director Marcus Stevens inventively stages the show (the panic attacks are practically cinematic) and there are scenes that would make Georges Feydeau and any of his farces proud.

The play is very self-aware, which serves the piece as the actors are able to laugh with the audience at some of the more absurd plot points. There are many inside jokes about film and theatre, but they are so funny it doesn’t really matter if everyone understands the context or not. The cast is across-the-board great, and with Stevens’ help, they embrace the silliness with gusto and verve. Jennifer Fouche almost steals the show with her impeccable timing and brassy delivery. Paul Pakler also delightfully chews the scenary as Dante, the egotistical, self-absorbed, and height-challenged actor.

There are many comical tropes the audience will easily recognize, homages to films and plays, and most of the time it all weaves itself together seamlessly. There is one comedic plot line that runs long and its joke wears thin, but altogether Walken on Sunshine is a laugh-out-loud funny production. If David Droxler, producer Chelsey Shannon, and the rest of the team can clear the music rights (and If they channel their inner Walken, they probably will), expect Walken on Sunshine to have a long, sunny life.

Walken On Sunshine is by Dave Droxler. Music is by James Rushin. Directed by Marcus Stevens. Set, Costume, and Prop Design is by Deb O. Lighting Design is by Keith Truax. Stage Manager is Haley Wilson.