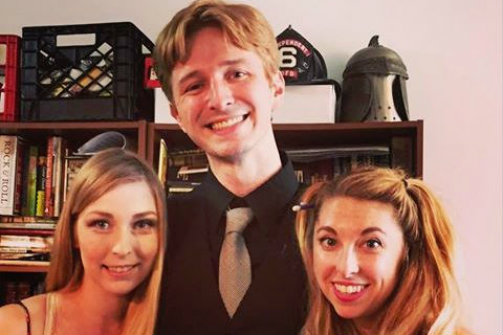 BOTTOM LINE: A valiant attempt at a comedy about a family of performers, where everyone wants to be center stage.

The Sutherby Triplets is full of actors: a comically egotistical, crazy family of actors. Some are successful, some less so, but they are all attempting to be the only one in the spotlight. And that’s just the triplets: Susie, Sally, and Sammie—I mean Bob (respectively played by Anna Wallace-Deering, Melissa Patterson, and Rich Wisneski). The trio comes home at the firm request of their mother Anne (Wende O'Reilly), a fading diva from the sitcom Halloway House—think The Partridge Family meets The Brady Bunch. It’s 1997 and Anne still competes with Shirley Jones for roles. The triplets were child stars, and two of them are still working in the entertainment industry. The only boy, Sammie (I mean Bob), is constantly on the verge of a kooky nervous breakdown.

Anne has told her children that they are celebrating her husband’s 50th birthday. But it’s not his birthday at all. The real reason Anne wants them home is because she has something important to tell them. Husband Robert (played by the affable Timothy Scott Harris) is, relatively speaking, the most laid back of this peculiar group. While he’s amiable, he’s on a never-ending a crusade to vanquish the squirrels in his backyard.

When the Sutherby triplets meet up once again, all three immediately revert to their childhood selves and the fracas begins. Theirs is a sibling rivalry on the scale of the Andrews Sisters. Sammie starts to lose it and Sally and Susie immediately sharpen their claws and screech like cats. They battle each other with gusto and sadistic enjoyment. It’s no wonder they still sit at the children’s table.

Here to witness the fireworks is an assorted group of eccentric friends and lovers who are also hiding their own secrets. Tim (Carl Gibson), Sammie’s brother-in-law, is immediately enlisted by Robert to plot the latest war with the squirrels, and Tim helplessly goes along. Gibson is exceptionally droll with his deadpan delivery and comically calm resignation.

Unfortunately the first act is too chock-full of exposition. Watching the characters interact is far more entertaining than hearing their overly complicated backstory. As it is, the first act feels long and the cast has trouble handling the weight of their expository history. Happily the play picks up steam in the second act and hits its stride. There’s hilarious confusion over notes, boyfriends, devious plots, and squirrels. The passive-aggressive war between mother-in-law Anne and daughter-in-law Regina (Melissa Farinelli) is quite fun to watch; both of them fall over each other as they compete to be the one who cares the most for Sammie (oops, still Bob).

Since the family is nuttier than the squirrels outside, we really get to enjoy watching the crazy fly as secrets spill out and the triplets find reasons to come together. Clearly, this is a weekend they will never forget. With more development, I think The Sutherby Triplets will be a play of glorious mayhem and gleeful family dynamics that would make any cast of The Real Housewives proud.