The Radicalization of Rolfe

THIS SHOW IS PART OF FRINGE ENCORES, PLAYING AT SOHO PLAYHOUSE FROM 10.23 to 10.29.
FOR TICKETS AND MORE INFO VISIT sohoplayhouse.com. 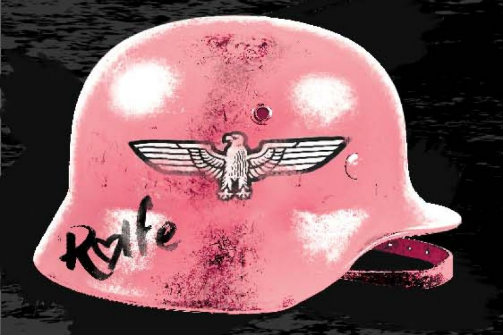 BOTTOM LINE: The B-characters of The Sound of Music explore the roles of love, patriotism, and power in a dark comedy that takes place shortly before World War II.

I was not familiar with The Sound of Music coming into this show; this concerned me as the overture played during pre-show. It seems almost like a crime to be in this industry and not know more than a few songs from that musical, but walking out of The Radicalization of Rolfe, I could not have been more happy for that to be the case.

Logan Sutherland plays the titular character, a messenger to the Von Trapp family who, under Herr Zeller (Dominic Comperatore), works to advance in the ranks of a Third Reich Austria. Appearances of other characters from the film include the Von Trapp servants Frau Schmidt (Polly Adams) and Franz (Jay Patterson); new to this play is Johan, Rolfe’s secret lover (Alex J. Gould).

The script is quick in its exchanges between characters. The language on stage flows in the concise and direct way that allows us to believe that these actors could just as believably be speaking German. The sharpness of the language is used strongly throughout and embodied naturally by the cast. Allusions to The Sound of Music are acknowledged unabashedly in the writing and provide a welcome comedic edge to an inherently dark story with a Nazi protagonist. If a good number of references undoubtedly went over my head, the cast’s impressive ability to play to the truth of the text meant this never bothered me.

The structure of the scenes allows the small ensemble to interact individually with nearly every character at some point, and poses a true testament to the chops of the significantly talented ensemble. As Rolfe's lover, Gould gives a standout performance; his playfulness and presence in the given circumstances are notable in a role where playing the problem might be an easy trap. Comperatore commands the attention and subservience of the characters around him simply through his subtle and effective physicality—he creates a man who is constantly simmering under the surface and has the potential to lash out at the drop of a hat.

Certainly The Radicalization of Rolfe will appeal to fans of The Sound of Music; what's perhaps even more important is that it will also appeal to those who might not count the classic musical among their favorite things.

The Radicalization of Rolfe is by Andrew Bergh. Directed by Abigail Zealey Bess. Lighting Design and Stage Management by Emily Grayson. Costume Design by Audrey Nauman.